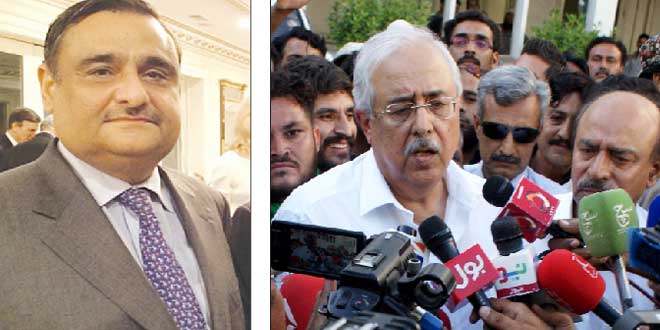 KARACHI:: The Anti-Terrorism Court No. II Karachi through its release order yesterday directed the Superintendent, Central Prison, Karachi to release former federal minister and PPP leader Dr Asim Hussain forthwith, if he is not required in any other case. The order said that Asim Hussain is facing a trial before this court and has been granted bail by the Honorable High Court of Sindh, Karachi. Earlier, the Sindh High Court had granted bail to Dr Asim in two references filed against him by the National Accountability Bureau (NAB) on the submission of surety bonds worth Rs. 5 million. Justice Aftab Ahmed Gorar, a referee judge in the case, approved the bail on ‘medical grounds’. Sindh High Court Chief Justice Syed Sajjad Ali Shah had appointed Justice Gorar as the referee judge after a divisional bench of the Sindh High Court was unable to reach a consensus regarding the bail application. Dr Hussain, a close aide of former president Asif Ali Zardari, was arrested in August 2015 by Rangers. After three months in preventive detention, the paramilitary force handed him over to police. NAB was handed his custody in December 2015 to initiate investigation. According to a spokesman of former petroleum minister, after getting bail from the SHC, Dr Asim said, “This is a joyous moment not only for me but also for those who stood with me during my hard times of detention. It was a bitter experience of being in detention for one and a half year, but I have firm faith on Almighty ALLAH and I was never dejected.” He said that I have always respected the judiciary and their decisions, adding that he had full confidence in the judiciary and always believed in supremacy of law. Dr Asim thanked the court for granting him the bail.

Updates
« Dr Asim’s bail; what Imran Khan is up to? Legal hiccup delays Dr Asim’s release for a day »