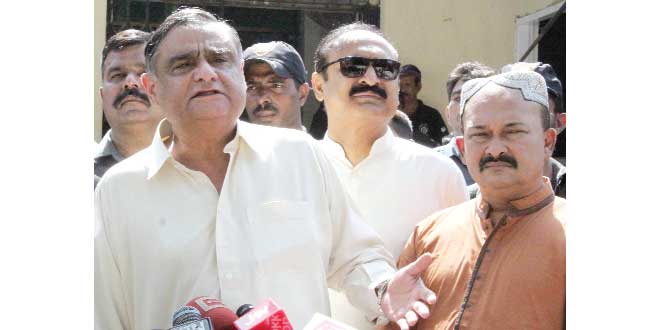 KARACHI: Former petroleum minister and President PPP Karachi Division Dr Asim Hussain in reply to question by media persons over commotion by legal fraternity at the NAB Court, said that, “I had already informed you that this is their (Sharif family) business and in the language of underworld it is called crime. I have predicted that they want to split Pakistan and they talk about greater Punjab.” “Earlier, they made the Rangers controversial by creating fuss and today their lawyers have committed the crime. We have never done anything like that. In my case we cooperated with Rangers. No party workers were called or gathered by us in the courts and no slogans were raised. Our workers never created unrest. Such actions are not laudable. Earlier, Dr Asim appeared before the accountability court in NAB reference No.19/2016 of JJVL case. The court adjourned the hearing for 16 October. Dr Asim further stated that in the past PML-N had also attacked on Supreme Court premises and they will continue doing this. ‘Might is right’ is their favorite law. They should be warned of public sentiments. Captain Safdar obtained bail without warrants issued by chairman NAB. While the same chairman issued warrants against me. He raided the house of my sister but nobody asked the reason. I will request the newly appointed chairman NAB, Rangers and the Chief Justice to review my cases. I am the victim of injustice and excesses under wrong information by these people. If there allegations against Nawaz Sharif are wrong, he should come to courts and make it clear just like me. I am facing cases in the courts just to clear myself. Replying to a question from media about his cooperation with Rangers and the confessional video released by them, Dr Asim said I have earlier replied this question that it was recorded under duress and a case is already filed in High Court. He agreed that former NAB chairman Qamar uz Zaman was appointed with the consent of PPP as opposition and PML-N as ruling party and said sometimes such appointments are proved wrong and mistakes do happen but it does not mean that we should support our mistakes.