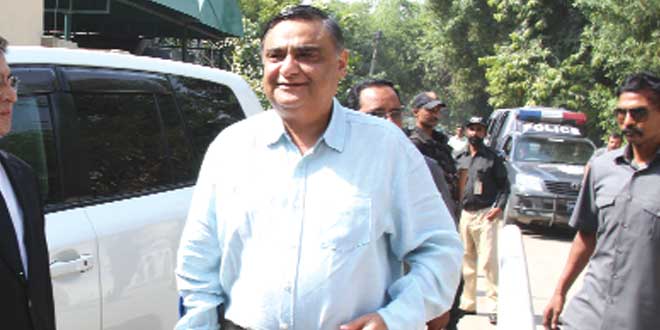 KARACHI: Former petroleum minister and President PPP Karachi Division Dr. Asim Hussain yesterday lashing out at PML-N leader Nawaz Sharif said that he is lucky to visit London and look after the health of his wife on a cancer bed, while I was disallowed to visit my ailing wife being treated in the same city. “It was a personal vendetta just to squeeze Asif Zardari.” “This is neither justice nor the rule of law,” has Pakistan become a banana republic? Dr Asim asked this while talking to media persons outside the accountability Court here yesterday. About NAB’s new chairman, Dr Asim hoped that he will establish rule of law and review the cases registered against him. He said the former chairman NAB was the stooge, and was allegedly involved in drug smuggling. That’s why he was appointed as chairman NAB just to obey the orders of his bosses and to facilitate them by targeting the political opponents through fake cases. Earlier, Dr Asim Hussain appeared before the accountability court IV in NAB reference No. 13/2016 along with co-accused Ather Hussain. During the hearing, Presiding Officer once again snubbed the Prosecution Witness Mohammad Akram for his failure in correctly numbering the case documents. He was warned of arrest if he continued wasting the court time and misguiding attitude. Next date of hearing was fixed on 19th October. The court announced to hear the other reference No.19/2016 of JJVL on Friday 13 October. After the hearing Dr Asim Hussain addressing the media outside court stated: “I want to talk about the Nawaz Sharif private company limited. Our elders taught us the lesson of love with Pakistan.” He faced the inquiry, investigation, JIT and the Supreme Court but was bailed out from NAB court without going into jail even for even an hour, your name never put on ECL. On the other hand what happened to me? It was on your orders that I was stopped from leaving the country, he said. I am witness to many events, how they plundered the wealth of the country. What they have done to the people of Pakistan who are suffering from poverty and hunger. “I will make disclosures soon in this regard. Dr Asim further said, “I will address a press conference to discuss their economic policies and the depleting foreign currency reserves that are reduced to just 13 billion dollars. If the reserves declines to 7 billion dollars I will advise the general people to withdraw cash from the banks because it would just be a bankruptcy”, Dr Asim said.