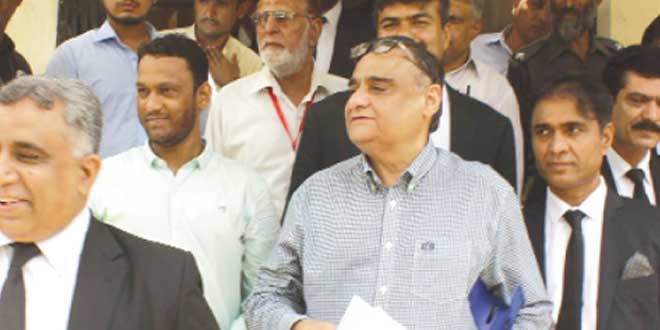 KARACHI: Dr Asim Hussain’s defense counsel Anwer Mansoor Khan has said that reference filed by NAB in Accountability Court is a malafide exercise. There was nothing to do with SSGCL, it was the OGDCL the actual authority dealing in this matter. He was submitting his arguments in NAB Reference No.19/2016 of JJVL case before Accountability Court IV yesterday. The next hearing is fixed for 3rd June. Anwer Mansoor added that the financial mismanagement allegations were made after Dr Asim had completed his term as the petroleum minister. He honestly served as the minister from 2011 till 2013. Dr Asim’s lawyer told the court that the complaint received by NAB did not include his client’s name at any stage. The Tender was awarded by the Board of OGDCL and Dr Asim was not the member of that Board. There was no individual decision made by Dr Asim. After the year 2013 till now all the MOUs are signed by the incumbent Petroleum Minister Shahid Khaqan Abbasi why he is not being made a party in this case? Defense counsel questioned.. Other accused of the case Shoaib Warsi, Zuhair Siddiqui, Khalid Rehman and Basharat Mirza were also present in the court while Barrister Latif Khosa attended the hearing along with other advocates. Talking to members of media outside the court after hearing, Dr Hussain said that Interior minister Cg Nisar Ali Khan and chairman NAB are influencing the NAB prosecutors. Being Pakistan Peoples’ Party (PPP) President Karachi Division Dr Asim Hussain, alleged that Interior Minister Chaudhry Nisar Ali Khan and National Accountability Bureau (NAB) Chairman Qamar Zaman Chaudhry have launched a personal vendetta against him. He said Karachi is being ignored by the federal government and deprived of its due share in the budget.