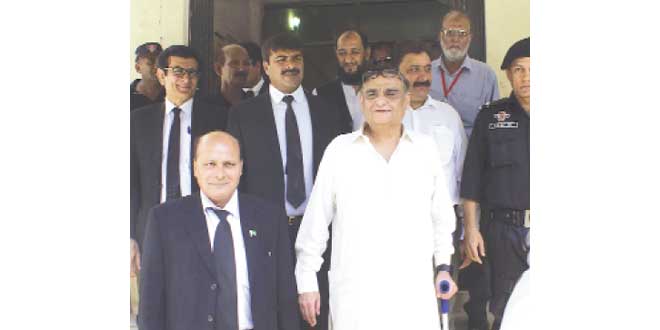 TREAT SHARIF’S THE WAY I WAS TREATED: DR ASIM

KARACHI: Former Petroleum Minister and President PPP Karachi Division Dr Asim Hussain has urged the NAB authorities to act in accordance with law. He was talking to media members outside the Accountability Court IV yesterday. Replying to various questions about difference of NAB treatment with him and against Sharif Brothers he said; the case of Hussain Nawaz and Hassan Nawaz was more serious and on higher pedestal than his case but Chairman NAB Chaudhry Qamar uz Zaman’s acts differently. Sharifs may be put under detention for more than 18 month just like me and then their trial should start. First the NAB should arrested them, put behind bars for 18 months and then establish a JIT to interrogate them just like me. There were witnesses against them while in my case there was no proof of any offence. Against me, there was just one anonymous application, and I had explained many things. Both, self-incriminating evidence and anonymous applications are illegal in the eyes of law but it was all done by Chairman NAB, Dr Asim Hussain added. Earlier during hearing of the NAB Reference No.19/2016 against JJVL, defence counsel Anwer Mansoor Khan continued his arguments and stated that Islamabad High Court had already decided this case on 24 June 2011 but NAB authorities did not bother to study Court Order and once again opened this matter without any merit.z There is no mention of any benefits gained by his client Dr Asim Hussain in all reports submitted in this case.The complainant Dr Anwer Sehto had a chequered character during government service, he was twice sacked, charge-sheeted and issued notices by FIA. This is all put on record. He further quoted that under Article 10-A of the constitution no any criminal charge sheet could be framed until the proved substance is available. Anwer Mansoor Khan stated that whatever the Investigating Officer said the NAB Chairman relied upon him blindly without considering all the material and applying his mind. The Court fixed 10th June as next date of hearing.