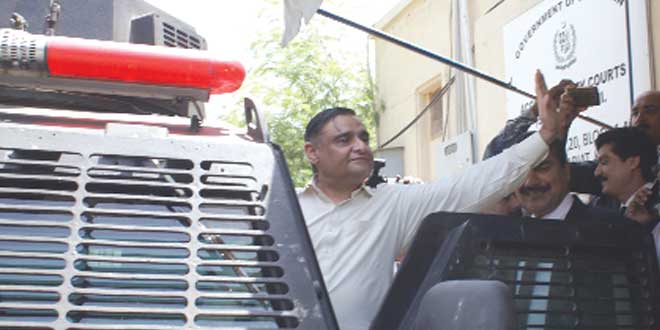 ‘ABID SHER ALI HAS FORGOTTEN THE DEAL HE STRUCK WITH ME’

KARACHI: The Sindh High Court will hear Dr Asim’s plea on 3rd May for removal of his name from ECL. This was announced by the division bench comprising Justice Muhammad Junaid Ghaffar and Justice Muhammad Humayon Khan yesterday. Sardar Latif Khosa appeared on behalf of former Petroleum Minister and President Pakistan Peoples’ Party (PPP) Karachi Dr Asim Hussain. The petition stated that Dr. Asim has been granted permission by Anti-Terrorism Court (ATC) to travel abroad as the patient suffering from ailing back and severe kidney pain and the medical board has advised him for treatment abroad, hence his name should be removed from the ECL and passport should be released to him. Earlier, Dr Asim appeared before Accountability Court in NAB reference No.19/2016 about JJVL along with his Counsel Anwar Mansoor Khan and others including Zuhair Siddiqui, Shoaib Warsi, Basharat Mirza, and Malik Usman. His Counsel informed the newly joining Accountability Court Judge Fareed Anwar Qazi that they were not provided relevant documents by the court for which they had already requested the court and raised many objections. On his request the court adjourned the hearing till 5th May. Moreover, replying to questions from media regarding Abid Sher Ali as he had called for formation of JIT on Ayyan Ali and Dr Asim, the PPP leader said that Abid had forgotten the deal he had struck with him (Dr Asim). To a question about Imran Khan’s statements against him, Dr Asim Hussain said I have great respect for Imran, adding but he first acts and then thinks, I don’t mind his comments, he is under pressure by a different mindset. About leading prayer in Dr Ziauddin Hospital’s newly inaugurated mosque, Dr Asim said, Please don’t give it a political color, any Muslim can lead the prayer, there is nothing special.