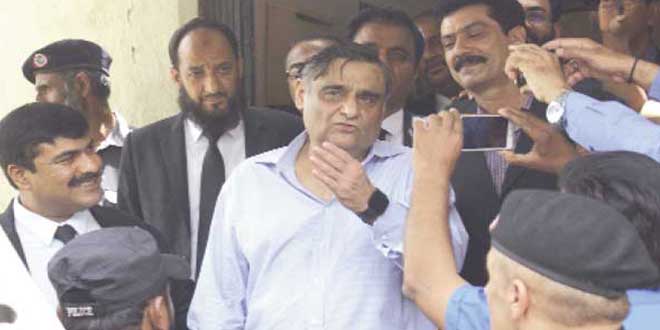 By Nasir Mahmood
KARACHI:  The Accountability Court IV has fixed May 6 as next date of hearing for the NAB reference No.13/2016 against former petroleum minister and President PPP Karachi Dr Asim Hussain and others after hearing the arguments from both sides yesterday.
Dr Asim appeared before the Accountability Court along with his Counsel Amir Raza Naqvi. His Counsel informed the Court that the land allotment case was already pending with the Supreme Court and this fact was concealed by the NAB investigation officer.
Amir Raza Naqvi in his arguments stressed on two points that the NAB reference against his client is non-maintainable and that this was not a fair trial on behalf of the NAB. And the other point was that even a charge sheet could not be framed until its clearance from SC or a final judgment from the apex court. He hinted that according to media news there is already a reference filed against Chairman NAB.
He pleaded that till judgment from Supreme Court no other court could discuss or run the case on this subject. He said that NAB authorities had concealed this fact from the Accountability Court. He had already raised this objection before the previous judge in this court that the NAB authorities may be directed to file a statement in this regard that the matter is sub-judice and already pending before the Supreme Court. Amir requested that the court may ask whether the IO was aware of this fact and he concealed from the court or he did not read the file properly and was unaware about this fact.
The Court ordered to call the former IO Zameer Abbasi and incumbent Osama Younus on next hearing.
Dr Asim while replying to questions by media outside the court stated that he was going to challenge in the court the mishandling of coal transportation from Karachi port. “The government is handling this imported coal dangerously by violating the international rules and procedures. This mishandling is causing various deceases in Karachi and we will claim the damages,” he added.

Updates
« Name off ECL: SHC to hear Dr Asim’s plea on May 3 ‘Struggle for workers’ rights to continue’ »