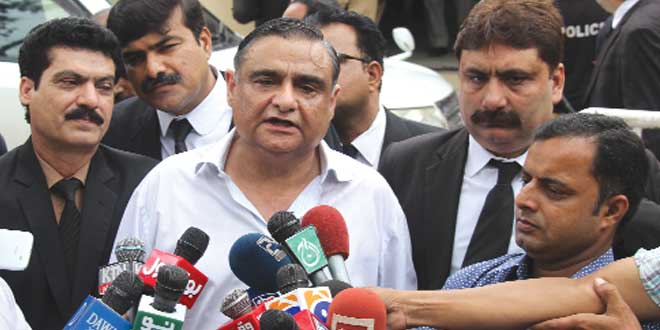 PM ABBASI TOLD NAB THERE ARE NO CASES AGAINST ME IN PETROLEUM MINISTRY: DR ASIM

KARACHI: Pakistan People’s Party (PPP) Karachi Division President Dr Asim Hussain has said the National Accountability Bureau (NAB) has been formed to take political revenge. He remarked that NAB itself has closed the cases of Nawaz Sharif, adding that he has no trust in this institution and its investigation. The former petroleum minister termed NAB a political institution, and said its laws are wrong and should be changed. He was talking to media yesterday after hearing in the accountability court and said the newly-elected Prime Minister Shahid Khaqan Abbasi should not have praised former premier Nawaz Sharif who was disqualified by the apex court, and ousted disrespectfully. He said, “Nobody should have the power to arrest anyone as I also suffered for one and half year without any reason. And now the NAB officials are telling that I will flee from Pakistan, why should I run away? This is NAB chairman who will run out of Pakistan. My all assets are in Pakistan, I will get the judgement from the courts by facing all the cases of today and tomorrow. Because I am not guilty but they are guilty, they only serve the money.” Welcoming Abbasi as new Prime Minister, Dr Asim said he is a very good man; I am fond of him and wish him all the best. He is democratically elected Prime Minister. He had told the NAB authorities that there was no case against me in petroleum ministry, I wholeheartedly wish him well and I will urge him to complete his party’s term of remaining nine months. But he should be the Prime Minister of Pakistan, he should not be the PM of a particular party or Prime Minister of Nawaz Sharif. I will request him to be a Prime Minister of Pakistan and bring out the country from present crisis, and keep distance from Chaudhry Nisar. Dr Asim stated that being President Karachi division he has completed various development projects, including proper laying of Sharae Faisal after 30 years, and recently inaugurated underpass, new construction of underpass at Punjab Chowrangi, Tariq Road renovation, revamping work in Saddar area, Lyari Expressway, Scheme of widening of Gujjar Nullah, ICI flyover, North Nazimabad underpass at Karim Abad etc. I think District Central is the most neglected district, since I belong to Central district I am keen to develop it the most, he added.