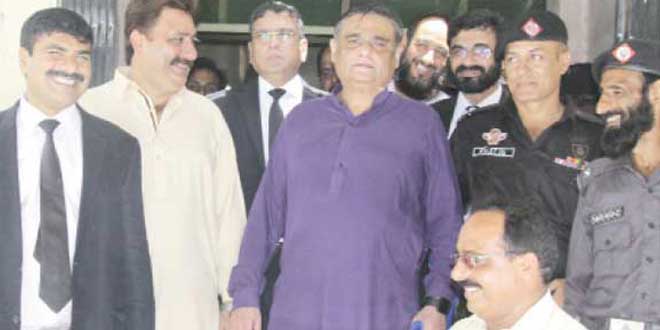 KARACHI: Former petroleum minister and PPP Karachi Division President Dr Asim Hussain has said that his party would certainly win with heavy majority in the bye-election of PS-114 Karachi being held on Sunday (today). He was talking to media after his appearance before the Accountability Court-IV yesterday. The court fixed 21st July as next date for the hearing of JJVL reference No.19/2016 filed against him by NAB. While the case No.13/2016 would be heard on 18th July. Replying to the questions from media, Dr Asim said that NAB chairman is a corrupt person as he has crafted fictitious cases against me. Supreme Court has ordered to file case against him. “NAB must work in accordance with the law. But they have established special courts where prosecutors are their own employees. Today they sent the fifth prosecutor in my case, while the previous four had failed to prove any case against me because they don’t have any evidences in these cases. They just want to pressurize me for political gains. NAB is the political arm of the government that’s why they don’t want to disband it. Replying to another question he said they are paranoid, they cannot sustain pressures. We will challenge their orders as soon as we receive.” He said, “There are 10,000 plots in Karachi but NAB has selected to target me only and no other person has been charged for that. In some cases they capture officials and in others the beneficiary is held responsible by them. In JJVL case they did not touch the cabinet who gave the approval, neither the companies were asked but only I was made the scapegoat. In the references filed against me all the responsible persons are scot-free except me. Is this the justice?” To another question, he said that Pakistan is being damaged, this country was created for the people but it is not being handed over to those elected by them. “The rulers are the enemy of Pakistan, they have occupied the country. Dr Asim said we are waiting for the JIT report. Nawaz Sharif is busy in touring foreign countries and chairing the meetings, but his time the game is over.

347 thoughts on “‘NAB crafted fictitious cases against me’”