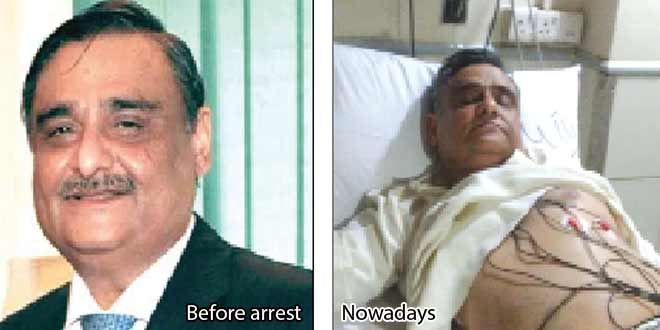 Karachi : The Accountability Court granted permission to Dr Asim Hussain on last Saturday to visit Ziauddin Hospital for hydrotherapy treatment for six weeks. The court also ordered the board of doctors formed for Dr Asim to present its report on January 28. The court was hearing the case against former federal petroleum minister, who is also a Pakistan People’s Party leader, and summoned prosecution witnesses to record their statements on January 28. Dr Asim’s lawyers refused to accept the documents presented as evidence saying that computer-generated documents were unacceptable. They moved an application to the court that these documents be declared irrelevant. The court after hearing the arguments reserved its ruling on the documents presented by the National Accountability Bureau. Dr Asim and a co-accused, Athar Hussain, were present in the court. The investigating officer of the case presented a report on Dr Asim’s surgery. The court directed the medical board to present its report on the matter. Earlier, the court had passed its detailed order noting that Article 9 provided the right to life to every citizen and it was imperative to provide treatment to the ailing Dr Asim. The court had permitted him to visit the hospital twice a week for six weeks and now it has granted six weeks’ time for his hydrotherapy treatment. Meanwhile, on 17 January during the hearing in Sindh High Court on two bail applications special NAB prosecutor Malik Altaf in his arguments agreed with the ailments described by the counsel for Dr Asim Hussain. But opposed the bail on medical ground and stated that Dr. Asim had been provided cure and allowed maximum possible facilities while in detention at sub-jail of JPMC. However, the counsel for Dr Asim Hussain, Amir Raza Naqvi in CP. No. 7597/2015 adopted the arguments of Advocate Anwer Mansoor Khan and further stated that the treatment was not proved fruitful physically and psychologically due to the more than 17 months long detention of his client and all the reports are showing that his health declining every coming days. Therefore, it was requested to release him on bail. The counsel of SSGC Asim Iqbal gave his consent to release Dr Asim Hussain on bail. The bench after hearing arguments from both sides announced to reserve the judgement on two bail applications. It may be mentioned here that the bail application No. 1696/2016 was filed on 25th March 2016 and since then it was fixed for hearing on 17 times but was adjourned on one pretext or the other, while on 18th date it was finally heard and the judgement is reserved. On the other hand Constitution Petition No. 7597/2015 was filed in the Sindh High Court on 4 December 2015 and during past more than 13 months it was fixed for hearing on 25 times but adjourned all the times without hearing. On 17th January it was the 26th date when it has been considered by a bench for hearing and the result is being awaited. It may be mentioned here that in January, 2016 when Administrative Judge Accountability Courts, Saad Qureshi during the hearing allowed the National Accountability Bureau (NAB) to keep custody of former federal minister Dr Asim Hussain for 14 more days the prosecution had said that 80 percent of the investigation into the PPP leader was complete and another two weeks would be required to complete the remaining 20pc of the investigation and other formalities. Defence lawyers Amir Raza Naqvi and Anwar Mansoor Khan argued against further detention of their client, citing psychological pressure. The defence counsel contended Dr Asim was physically and mentally disturbed due to his detention, and that the former minister was not mentally active. The defence said his detention violated certain articles of the law. They maintained that he was not required for the investigation any longer and asked for him to be sent to prison on judicial remand. Dr Haroon who was ordered to conduct a psychological checkup of Dr Asim in his report presented in court said that the detainee was under extreme mental stress and should be provided with an open and relaxed environment. He recommended conducting medical tests, including an MRI on Dr Asim. The court had directed NAB to arrange the recommended medical tests and medical investigation, take the reports to Dr Haroon and then comply with his directions regarding treatment of Dr Asim. Dr Asim’s remand was further extended on January 19, 2016 in NAB’s custody for 10 more days over his alleged involvement in offences triable under NAB’s Ordinance, 1999 after completion of 14 days. In this hearing Dr Asim’s counsel opposed the NAB’s request of extension in remand, stating that his client has been in remand for 145 days but the investigators have failed to produce any authentic evidence. The administrative judge Saad Qureshi while extending the remand of former petroleum minister, directed relevant authorities to take the accused to a psychiatric, and if recommended he should be shifted to hospital. The court extended the remand till 9 February, 2016 for the fourth time when after 10 days expiry he was presented before it by the NAB authorities. Then after having spent over five months in the custody of various law enforcing agencies, former petroleum minister Dr Asim Hussain was finally sent to jail on judicial remand. The accountability court sent him to prison while seeking the investigation report by the next hearing on 22 February, 2016. At the outset of the hearing, National Accountability Bureau (NAB) investigation officer, Zameer Abbasi, sought a 15-day extension in the suspect’s physical remand. The defence lawyers, however, opposed the extension, saying their client had spent over five months in custody and this was a violation of basic human rights. After hearing the arguments, the administrative judge of accountability courts, Saad Qureshi, sent the suspect on judicial remand and directed for provision of better facilities there. The court also directed NAB to complete its probe and submit a report by February 22. Dr Asim is being treated at Jinnah Postgraduate Medical Centre sub-jail by doctors’ team on the same court’s order and is admitted there.