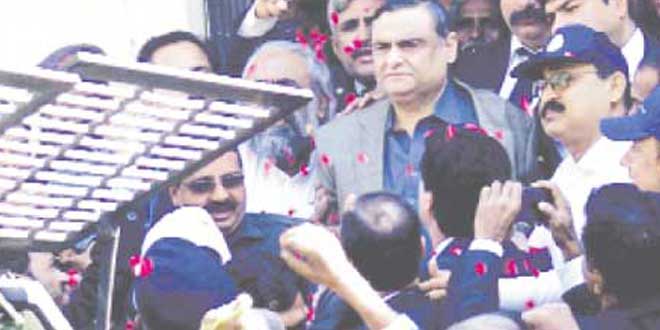 KARACHI: The Accountability Court IV in the NAB Reference No. 13/2016 against former petroleum minister Dr Asim Hussain and others has raised a question about the legality of the NAB case specifically with reference to the suo moto action already taken by the Supreme Court and directed the prosecution and defence lawyers to jointly prepare synopsis of the land allotment case to put before the court before next date of hearing. The hearing was adjourned for 28 January. Earlier during the hearing, defence lawyer Amir Raza Naqvi requested the court to exclude property case against Dr Asim Hussain from the NAB reference as being irrelevant. He challenged veracity of the case saying that the affairs of a private trust is not the jurisdiction of NAB authorities. Prosecution witness Amaduddin Chachar had stated that the said case was pending with Supreme Court and the notices were already issued by the SC, hence the interference by NAB through this reference is sub-judice and malafide from the very beginning. The NAB had not ceased the land allotment record in presence of the witness. The lawyer further stated the report of 12-7-2013 has proved that the PW had nothing to do with the land utilization department. He said the land allotted to Aga Khan University was also not utilized at that time but its cancellation was not done unlike the Ziauddin University, while the land could not be cancelled without issuing show cause notice. He added that the land was not handed over to Ziauddin University or Hospital but it was cancelled, then what was the offence or where was the misuse of the authority as alleged by NAB. Meanwhile, during cross examining of the evidence Mohammad Naveed, Manager of Wall Street Money Changers it was revealed that his company did not issue any authority letter to produce before NAB investigation officer neither submitted in the court. He said it is correct that detail of the documents is not mentioned in the record produced before the court. To another question PW stated that Dr Asim Hussain has never visited his company’s office or any branch and also not asked us for any transaction.

Updates
« Right of bail cannot be denied: Law expert Miseries of Dr Asim continue even after 17 months in detention »

290 thoughts on “Affairs of ‘Private Trust’ not under jurisdiction of NAB: Defence Counsel”