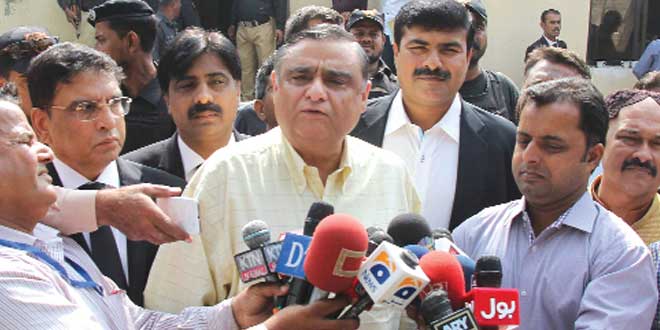 KARACHI:: Former petroleum minister and President PPP Karachi Division Dr Asim Hussain once again demanded that people who have looted Pakistan and its economy should be treated like criminals. He said that Nawaz Sharif & Company is very much corrupt, even they have corrupted the princes and bureaucracy of Saudi Arabia. They had taught the corruption techniques which has trapped both of them. He was talking to media members outside the accountability court yesterday after appearing in NAB reference No. 13/2016. The court without hearing fixed the next as 15th November. Dr Asim said; I will elaborate the detail of their corrupt practices in coming days. They had scraped the shale gas project of ENI Company that was bringing $ 2 billion investment for digging of 1500 gas wells in Sindh and by producing at least 1000 mmcf gas after which the province was to become self-sufficient in gas production. But they had deliberately cancelled this project just to earn commission in LNG. I had the documentary evidences but NAB took it away through raids on my house. This is too much against the country for which they should face the public courts. And we would decide their cases on Bunder Road what they have done with the people of Pakistan. Replying to a question about PTI and MQM recent public meetings Dr Asim Hussain said we are Karachiites, the city of 25 mln and belong to Pakistan People’s Party. The projects coming up here were never thought before. Since the charge assumption by sitting Chief Minister and myself as President Karachi Division all the development works are being done transparently and it is all before your eyes. Replying to another question he said that the recent census report shows the population of Karachi as 16 million while its actual population is 25 million people. How you can maintain the mega city in the budget resources of 16 million. In my opinion there should be fair counting we don’t recognize it.

252 thoughts on “We are Karachiites, City of 25mln belongs to PPP: Dr Asim Hussain”