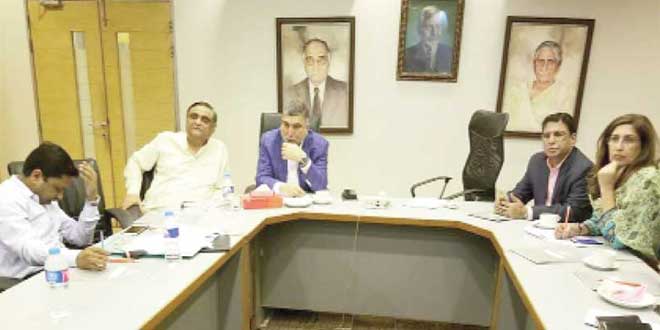 KARACHI: Dr Asim Hussain, President, Pakistan People’s Party (PPP,P) Karachi Division, chairing a meeting yesterday announced that the government of Sindh has decided to implement the Sustainable Development Goals (SDGs) Program for the current financial year 2017-18. SDGs would aim development of slum, under developed areas and pockets where the old infrastructure has either deteriorated or collapsed and unable to cater the demands of community on account of exponential increase in population. The meeting was attended by Dy Speaker Sindh Assembly, Commissioner Karachi and deputy commissioners besides district presidents of PPP,P. While informing about the details of this program Commissioner Karachi Ejaz Ahmed Khan said that the criteria of the projects would be to improve the living standards of masses which mainly include sewerage network, water supply, establishment of parks, playgrounds, farm to market roads and beautification of the city. Under the said program, Rs 100 million have been allocated for every constituency whether Provincial or Federal in which projects between Rs 1 million till Rs 20 million would be executed. He further informed that Deputy Commissioner would be the Project Director of the said program whereas at divisional level, the program will be steered and monitored by Commissioner himself. He emphasized that being field officers and having close liaison with the masses, DCs are well versed with the grave problems faced by the community and would therefore execute schemes of mass importance under his supervision. He was of the view that the development activities under this program coupled with upcoming mega projects in Karachi would definitely bring qualitative changes in the city of national importance.

364 thoughts on “Govt to spend Rs 100m in each constituency”