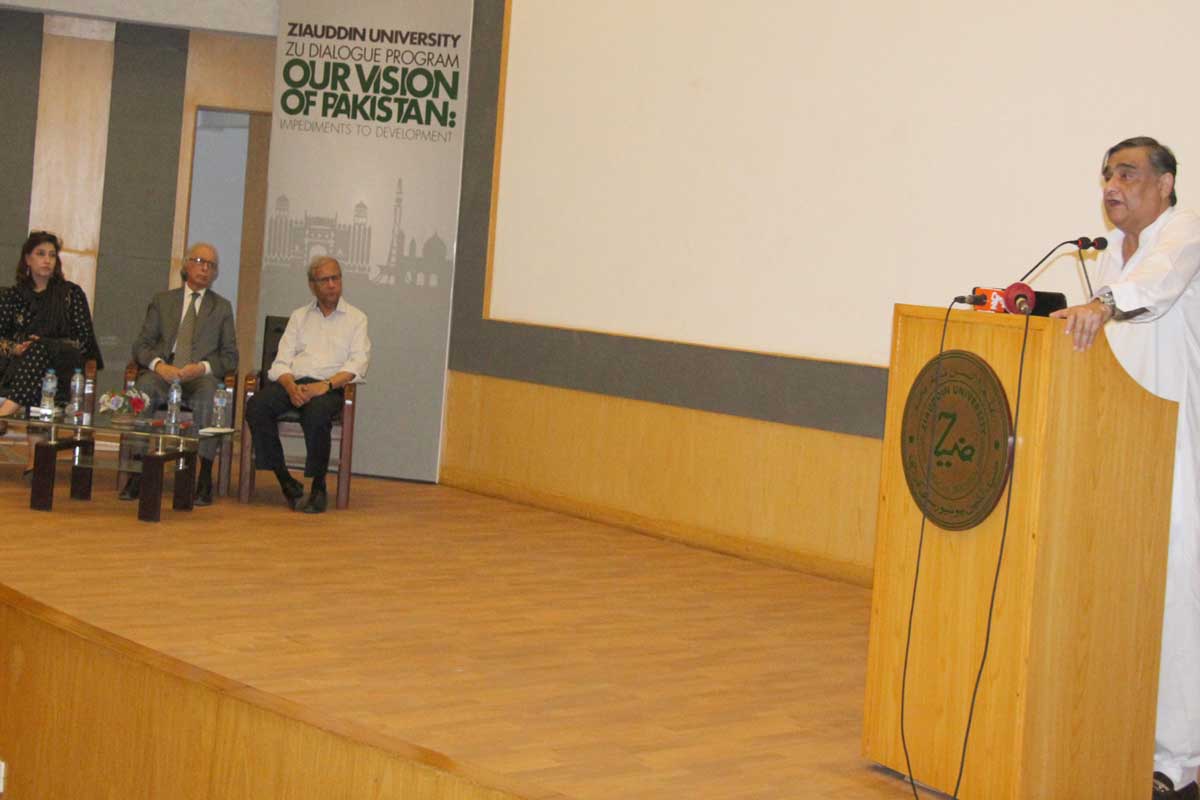 ZIAUDDIN UNIVERSITY SEMINAR “OUR VISION OF PAKISTAN: IMPEDIMENTS TO DEVELOPMENT
KARACHI: Dr Asim Hussain, Chancellor, Ziauddin University has expressed surprise over the annual imports of over $10 billion food items and over $2 billion import of cosmetics. He raised a question if we are one nation why wasting such huge amounts on lavish living and increasing the debts through trade deficit every year.

He was addressing the ‘ZU Dialogue Program’ here yesterday hosted by Ziauddin University.

“Our Vision of Pakistan: Impediments to Development” was the topic of the debate where the prominent economic consultants Dr Kaiser Bengali and Dr Huma Baqai were invited as guest speakers.

In his address, Dr Asim Hussain advised that we should take serious notice of increasing foreign influence on our country and the nation as a whole. He expressed concern over the national failure in changing curriculum of educational institutions for the last seven decades.

He stated:  “We should carefully study what is happening on geo-political scene in this region and emergence of CPEC. There was no mention of Pak-Afghan borders since our independence and we were sticking to Durand Line. We had five different provinces, all with different cultures, languages etc. We did nothing for harmonizing these things while the change of capital was also not a step in the right direction.

Dr Kaiser Bengali in his presentation stated: “ Pakistan’s external debts have crossed $100 billion. Our governments are always cutting developing projects budgets instead of non-development expenses. FBR does not refund the extra amounts collected from tax payers of trade and industry and at the end of year shows its huge collections by hiding the refund dues”. Replying to a question from audiences, he said that Dr Ishrat Hussain in his previous tenure had introduced more damaging policies just to please IMF, WB and other foreign forces against Pakistan. He has again been appointed by the PTI government which is alarming, Kaiser said.

He suggested abolition of ten ministries which are a burden on the national exchequer. He said military expenditures must be reduced. Pakistan is rich in resources compared to India and Bangladesh where excess population is a burden on their economy. We can end hunger and illiteracy and reduce poverty through collective efforts. Our ruling class is fond of foreign nationalities and European living standards, this culture must be ended if we want to progress, Kaiser Bengali added.

Dr Huma Baqai in her address said: “ As a nation we are paying very high price of deceptive policies and it is very insulting at international level. Our nation is good but as a state we are facing failure. Private solutions could not replace the state functions. Some difficult decisions are still not made possible, we are entrapped in instant solutions instead of long-term solutions.

Vice Chancellor Ziauddin University Professor Dr Pirzada Qasim Raza in his vote of thanks advised the nation to enter into implementation stage while we have already lost many decades in just speeches and planning only, he added.

291 thoughts on “Increasing foreign influence on our country be taken care of: Dr Asim”