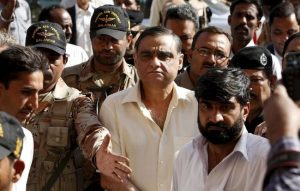 The past nine months have been“absolute hell” for the family of a former Londoner who became a high-ranking politician in Pakistan, but now languishes in jail there, says one family member.

Hussain, 63, has been held in detention in Pakistan since he was arrested on Aug. 26 on allegations of financing terrorism.

His supporters say his health has been steadily deteriorating — he’s had kidney failure and a heart attack while in custody — and are demanding he be granted bail and a fair and speedy trial.

“It’s just been absolute hell,” Hussain’s family member who asked not to be identified, said Wednesday by phone from Karachi, Pakistan.

The chairperson of a board overseeing five hospitals, Hussain was initially accused of financing terrorism and treating terrorists at one of his Karachi hospitals — all claims he denies.

An anti-terrorism court ordered him held for 90 days — the maximum allowed without charge under law — by Pakistan’s paramilitary Rangers.

In custody, his supporters say he was blindfolded and forced to stand up all night in a dark room while his hands were tied.

After 90 days he was handed over to the National Accountability Bureau and ordered to remain in custody for another 90 days. He’s spent the last three months held in a Karachi hospital, where he’s being treated for various health issues.

Last week, he was indicted on corruption charges, stemming from his time as the country’s petroleum minister under ex-president Asif Ali Zardari.

“It does seem to be a case of political victimization,” Saroop Ijaz, a lawyer for Human Rights Watch, said from Karachi.

“The lack of transparency and the denial of due process (are) a matter of concern to Human Rights Watch.”

Last month, the Human Rights Commission of Pakistan, an independent organization, expressed “grave concern” over a report about the deterioration of Hussain’s mental health.

“He’s been subjected to investigation for a very extended period of time . . . largley without oversight,” Ijaz said.

Born in Pakistan, Hussain moved his wife and two young children to Southwestern Ontario in the 1990s, settling in London, where he set up a travel agency called Travel Shop. All became Canadian citizens.

An orthopaedic surgeon back home, Hussain hoped to practise in Canada but couldn’t get the necessary certifications. He moved his family back to Pakistan six years later and resumed his career in surgery.

He became the chairperson of the Ziauddin Group of Hospitals, five Karachi hospitals named after his grandfather, Dr. Ziauddin Ahmed, a prominent figure in Pakistan’s independence movement.

While many of his colleagues from the Zadarari government fled the country following the Pakistan People’s Party loss in the 2013 election, Hussain chose to stay in Pakistan. The party had been in power since 2008.

A family member said Canadian government officials have been helpful so far, keeping in communication and attending one of Hussain’s hearings.

“They’ve been periodically checking in, so they’ve been wonderful.” he said.