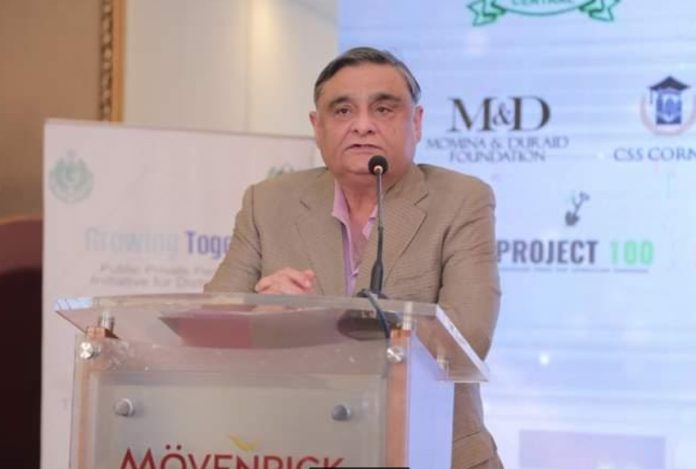 Karachi: A session on ‘Growing Together’ was held at a local hotel in which Dr Asim Hussain, a leader of Pakistan Peoples’ Party and former Petroleum Minister was chief guest. The event was organised by District Central under the umbrella of Public-Private Partnership with taking all stakeholders on board.

Dr Asim Hussain while addressing at the event started his talk by reciting Allama Iqbal’s poem stanza, ‘Main Akela Hi Chala Tha Jaanib-e-Manzil Magar, Log Sath Aate Gae Aur Karwan Banta Gaya’. In his address he said, I will not discuss country and Karachi at the moment as you all aware of this but will talk about District Central.

He said District Central had never been a transit place and explicated that as around 100 of my family members who were living here had left the place and I am only residing here all alone.

Lauding the efforts of Deputy Commissioner and Administrator District Central Taha Saleem, Dr Asim said that he has worked so tremendously in diversified areas where government could not deliver in past and added that governments are supposed so powerful that they can do everything but unfortunately at all times, District Central has been neglected.

Recalling back some past memories, Dr Asim said there was a time when ‘Hawa Chal Gai the ke Chalo Chalo Defence Chalo aur har koi Defence chala gaya’ and we were dejected like an alien, he remarked.

PPP senior leader also said that in last 10 years, people who were serving DMC central have done havoc to this district and devastated in all aspects, I just touch my ears even thinking about that apathy. Entire District Central turned into mushrooms of illegal portions, China-cuttings, countless houses were built on North Nazimabad’s hilly tracks.

Let me tell you point in time, residents of District Central came to me and uttered their grievances, I immediately decided to take responsibility on my shoulders to do some good for the masses. With utter sincerity and zeal, I step ahead with them and fully supported all the initiatives.

“We cannot eliminate corruption but can minimize it just because I believe that at present system and institutions have failed and they cannot safeguard Pakistan. I sometimes ponder whether we can come out of this quagmire or not,” Dr Asim lamented.

PPP leader added that under the prevailing circumstances, only one thing is left and it is last ditch to take our own to do ourselves and own things. There is no resilience in our system to resist situation. He also stated that during his meeting with Chief Minister Sindh Syed Murad Ali Shah said, he got approval of two Parks including Iqbal and Lal Qila Park located in FB area besides approval for Karimabad Underpass.

Whereas, projects of revamping Shahrah-e-Noor Jehan Street and road from UBL Sports Complex leading to Peoples’ Chowrangi have already been approved.

Dr Asim also revealed that under CLICK programme, we are going to build a full-fledge Sports Complex with multiple and state-of-the-art facilities at a huge ground in front of Ziauddin Hospital in North Nazimabad in near future.

He suggested to involve people in education sector and to collaborate Edexcel International known as Advanced Subsidiary Level/Advanced Levels which are designed for international learners who want to progress to best universities around world.

Dr Asim vehemently said, “We don’t want any favour or additional assistance from government, provide us what is given to Karachi, we will accomplish with our own efforts and comepetence but made it clear that no one will be allowed to go into mal-practices and corruption as we are determined to weed out this menace from society.

DC central Taha Saleem while talking to ‘Daily National Courier’ said that it is his desire to make Karachi’s central into a model district with all possible best civic facilities and to achieve this target he is trying his level best to take on board all the major stakeholders for different developmental initiatives across the district. He praised the vision and the efforts of Dr Asim Hussain for spearheading a robust developmental schemes drive in District Central and added that thru his continuous cooperation, DMC Central is gearing up ahead to attain all the desired objectives.

The Public Partnership initiative ‘growing together’ was largely attended by the politicians, members of the civil society, law enforcement officials, social workers and journalists. During the event, several MOUs were signed including refurbishing of Al-Mansoora Ground with support of Lucky-One and Alfalah Ground with succor of Meezan Bank. In addition, a City Information Technology Centre and three dispensaries already functional in district besides revamping of a school and Rescue Services with support of JDC founder Zafar Abbas and Chairman NKATI Faisal Moez took the ownership to setup a dispensary in district. Moreover,  Baghban website portal was also launched which is being oversee by eminent journalist Dr Aafia Salam.