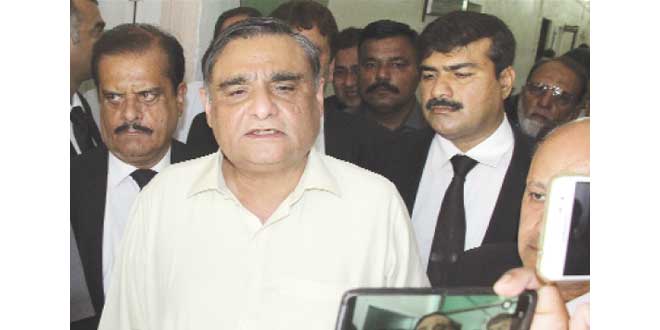 KARACHI: Pakistan People’s Party Karachi Division President Dr Asim Hussain has said that he is not engaged in political activities nowadays therefore knows nothing about any political developments as he is hospitalised and undergoing treatment. “I do go for outdoor walk sometimes.” Replying to questions from media outside the Accountability Court yesterday, he said that he does not know whether Chief Minister of Sindh had formed any committee to look after the affairs of medical colleges in the province. Commenting on the newly formed provincial NAB in Sindh, he said in his opinion this is in accordance with law, there must be provincial laws, he added. Commenting on Karachi package announced by PM Abbasi, he said it should be materialized at any cost because Karachi is already overburdened by the high influx of people. Earlier, the Accountability Court No- IV while hearing the NAB reference No. 13/2016 about prosecution witness Mohammad Akram’s presented record allowed defence lawyer’s plea for provision of the copies of the additional documents and adjourned proceedings till 19th August.