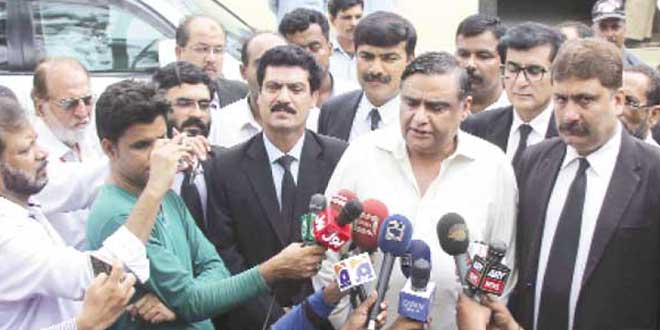 SHARIFS SHOULD GET BAIL AS ‘I GOT’: DR ASIM

KARACHI: Dr Asim Hussain, former petroleum minister and President Karachi division Pakistan People’s Party yesterday said that he did not celebrate the de-seating of the Prime Minister Nawaz Sharif as he didn’t like to wash dirty linen in public. He was replying to questions from media members outside the accountability court. He said, “This is bad for the country especially with reference to the prime minister of Pakistan. Their attitude was not good for Pakistan technically they should get their bails, as I have already got mine.” To a question about cases on Imran Khan, he said, “I am not expecting well about it. Replying to a question about Sadiq and Ameen Dr Asim said in my opinion it covers everyone in Pakistan. While commenting on ouster of Nawaz Sharif, Dr Asim stated that this Thief- Police policy (Chor-Police) usually occurs in all countries and democracies of the world. “There is nothing surprising. We knew since beginning that not only they were but their whole party is a team of thief. There is no problem if they are caught, it occurs usually. But I am sorry to say that such people when come into power they don’t differentiate between good and bad, they target the innocent people.” “For example, I was made a target and my case was monitored by Interior Minister Chaudhry Nisar Ahmed himself. Now their case would be monitored by Supreme Court. I prayed against interior minister Chaudhry Nisar and they are being punished for their ill attitude. He had claimed that he is not willing to become next prime minister, I say he is not capable for it.” He said in my opinion the people who do not accept the writ of establishment and judiciary they could not be called Pakistanis. “They should face the cases like me and Asif Ali Zardari. They are not the sacred cows. In my opinion Supreme Court should not monitor only their cases but all other cases too. Because eighty percent of the cases they register were fake and fabricated and were just for the purpose of victimization. My case is well known by all of you,” Dr Asim added and concluded with the age-old saying; As you sow, so shall you reap.

361 thoughts on “‘Sadiq and Ameen’ applies on whole of Pakistan”