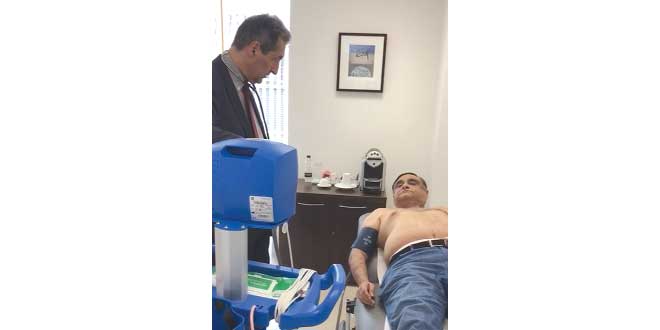 KARACHI: Doctors have told Dr Asim Hussain that he will be advised about his “fitness for surgery” after detailed examination of his blood tests and scans including medical reports of the past year. Dr Asim’s spokesman informed this scribe yesterday. Pakistan People’s Party, Karachi Division, President reached London two days ago, after the Supreme Court allowed him to travel abroad on medical grounds. Dr Asim, who is staying at his son’s central London flat, visited Wellington Hospital yesterday where he was examined in detail by leading neurological surgeon Dr James Alibone. “I visited Wellington Hospital for my disc surgery and to inform the doctors about the acute complications I have faced which have impacted my health generally, especially while I was in detention,” the spokesman quoted Dr Asim as saying. “I will return to Pakistan as soon as doctors allow me to do so,” Dr Asim said, adding that he taking his health issues very seriously and that’s the main purpose of his journey to London. When asked about the accountability court’s reaction during hearing of reference No.13/2016 yesterday when the judge showed annoyance after being informed that Dr Asim had left the country. The spokesman clarified that in the Judgment of Supreme Court, there was no requirement of NOC from NAB court. In accordance with Para 7 of Judgment Dr Asim had completed all the formalities and then left the country as per Supreme Court guideline. Hence, the NAB Court order is violation of the Supreme Court order, the spokesman added. Consequently, the judge sent a reference against Dr Asim to the Supreme Court and Sindh High Court. The spokesman further stated that Dr Asim had approached the National Saving Centre on 5th September for verification of saving certificates amounting Rs 6 million for security deposit in the court. On September 8, the National Saving Centre had confirmed the Accountability Court about genuineness of the said transaction. Similarly, the NADRA authorities had conveyed on September 12 the verification of CNIC of the guarantee to the Accountability Court.

316 thoughts on “No NOC mentioned by NAB court in SC order: spokesman”