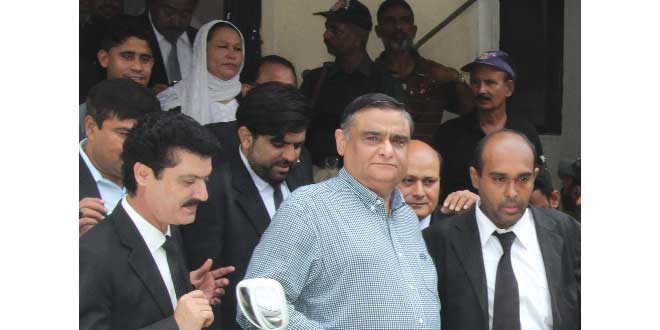 KARACHI: Pakistan People’s Party Karachi Division President Dr Asim Hussainhas said that former prime minister Nawaz Sharif was conveying a wrong message. He was commenting on the GT Road rally that was launched yesterday. He was replying to various questions from media after appearing before the accountability court yesterday. “Establishment and judiciary are the two big pillars of the country and I think he should not go against them, especially army had done great work in Pakistan. With reference to wiping out terrorism in Karachi, Rangers have contributed a lot and they have cleansed the city. I appreciate their efforts for Karachi. He clarified that recently my statement with reference to Rangers was wrongly presented by the media.” Dr Asim further stated, “We hold establishment and judiciary in highest esteem and want to convince Nawaz Sharif that he should also understand this as without them theaffairs of the country could not run smoothly. I have also faced the fake cases from his government and I will face those cases until I will prove my innocence. Replying to another question, Dr Asim said Pakistan was created after the sacrifices of millions of innocent people and our elders. “It was biggest migration in history of the world. We should protect the country not only physically but morally too along with our armed forces.” Earlier, the Accountability Court No- IV while hearing the Jamshoro Joint Venture Limited (JJVL) reference No. 19/2016 adjourned proceedings till 19th August. While in reference No. 13/2016 the prosecution witness Mohammad Akram appeared before the court but defence lawyer Amir Raza Naqvi objected that the witness has presented some additional documents comprising 3700 pages, which were not part of the earlier record of the case neither included in the index nor paging. Therefore this could not be allowed. The court ordered to review and study the case record within one week time and said there should be no extra documents allowed to make part of the case. The court also said if there was any objection, it should be filed in writing. Next date for hearing was fixed as 16th August.