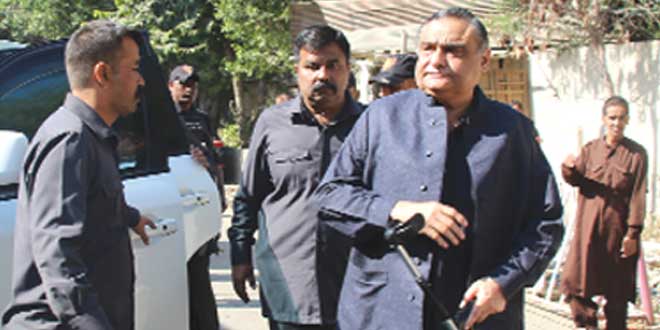 DR ASIM HUSSAIN HAD ONLY ONE ACCOUNT SANS STR

KARACHI: Prosecution Witness (PW) Mohammad Akram, UBL branch manager again failed to produce the letter addressed to him by NAB Investigation Officer (IO) seeking his appearance about investigations in NAB reference No.13/2016 against former petroleum minister Dr Asim Hussain tried by accountability court IV. He was the fifth witness cross examined in the case out of the list of 31. Replying to a question by Defence lawyer Amir Raza Naqvi, the witness stated that the said letter could not be traced so he is unable to produce the letter or its photo-stat copy in the court. “It means the letter did not exist”, Amir Naqvi said. However, replying to other questions the witness said that first he had received the letter from NAB investigation office and afterwards a telephone call was received by him to appear before the IO. “I don’t remember which documents I was asked to produce before NAB, PW said. I did not find any STR (Suspicious Transaction Record) in any of the accounts mentioned in this case. Neither had I received any objection from State Bank of Pakistan. All those accounts were opened and operated in accordance with the banking laws and rules applicable. No audit objection was received about those accounts in UBL,” the PW said in his replies. He further stated that the I.O. had not made any index of those documents. There was no loan account in my branch on behalf of Dr Asim Hussain and others. To another question in cross examination he said audit reports were not the requirement in such accounts. He further stated that these documents were not in my branch and were obtained from UBL Head office as required/ summoned by the NAB. I got those documents through e-mail from bank Head office and provided its print out to NAB I.O, he deposed. Further proceedings were later adjourned till November 27.