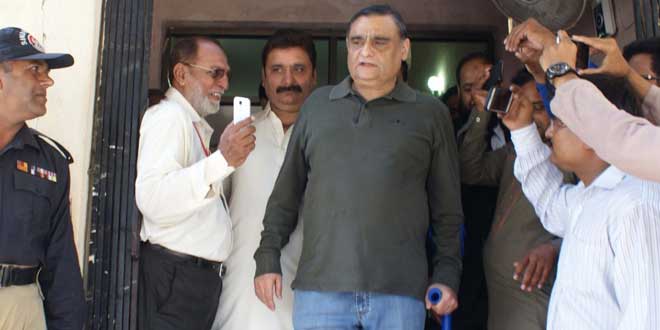 KARACHI: Pakistan Peoples’ Party Karachi President Dr Asim Hussain lashing out at the National Accountability Bureau authorities has stated that NAB is itself involved in corruption. While talking to media members outside the Accountability Court yesterday, he said that they had alleged a corruption of Rs 462 billion against me but so far have been unable to prove even one percent of that amount. If they give me one percent of this amount, “I would distribute half of it among you [media friends/court reporters]”. Dr Asim further said but the NAB has failed to provide any proof and on this malicious performance this department [NAB] should be banned. Replying to a question, the former petroleum minister stated that after coming out of this crisis he will definitely file a case against NAB authorities. ‘You can see that NAB is already under fire in Supreme Court. Its slogan is “Say no to corruption” but in my opinion it must be re-written as “Set a thief to catch a thief.” To another question about Mayor Karachi Waseem Akhter’s demand for powers, Dr Asim replied the Mayor should be given all powers he enjoys under the Constitution. Earlier, Dr Asim appeared before Accountability Court in NAB reference No.19/2016 about JJVL but due to his Counsel Anwar Mansoor Khan’s unavailability, the court adjourned the hearing for 20th May. It may be mentioned here that Anwar Mansoor Khan is appearing in Supreme Court in another case. Azhar Siddiq advocate, the counsel for another accused Basharat Mirza in reference No.19/2016 argued before the court that this reference is not maintainable. He said that NAB has no proof against Dr Asim Hussain and others. “This is a case of corporate sector while NAB has no expert on the subject of corporate affairs,” Azhar Siddiq added.