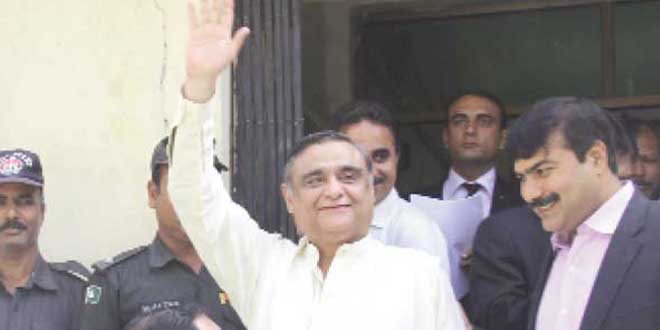 KARACHI : The NAB authorities have concealed the original record of the JJVL case and charge could not be framed without authentic documents. Anwar Mansoor Khan Defence counsel for Dr Asim Hussain said yesterday in the accountability court IV during hearing of NAB reference No.19/2016, JJVL case. Former petroleum minister Dr Asim Hussain appeared before accountability court during hearing, while the next date is fixed on 24th November. During the hearing Anwar Mansoor Khan in his arguments opposed the NAB prosecutor Riaz Alam’s plea to frame the charges. Khan submitted that he has gone through all the documents and record submitted by NAB in this court but did not find the name of Dr Asim Hussain anywhere for any offence. The complaint did not mention the name or referred to his client. Dr Asim Hussain was arrested on 26-8-2015 and on 19-2-2016 an investigation was ordered against him while at the time of arrest there was no complaint or allegation levelled against Dr Asim Hussain. Even then the title of the case is mentioned as ‘Dr Asim Hussain & others’. Hence, this is a classic example of motivated prosecution, Anwar Mansoor added. He said that under the law an inquiry is authorized on the basis of a complaint, suo motto action or the government’s instruction. But here none of these three reasons was mentioned. There was only one application by Dr Anwar Sehto called a source report but in details of the case this source report was not mentioned anywhere. Anwar Mansoor further submitted before the court that earlier orders passed by Islamabad High Court and Supreme Court in JJVL case were never discussed by the prosecutor. Why they were not being considered or challenged by the NAB, he raised the question. Hence, it is not clear that in the presence of those orders by Supreme Court of Pakistan and Islamabad High Court how the reference could be filed and charge chould be framed, Defence lawyer concluded.