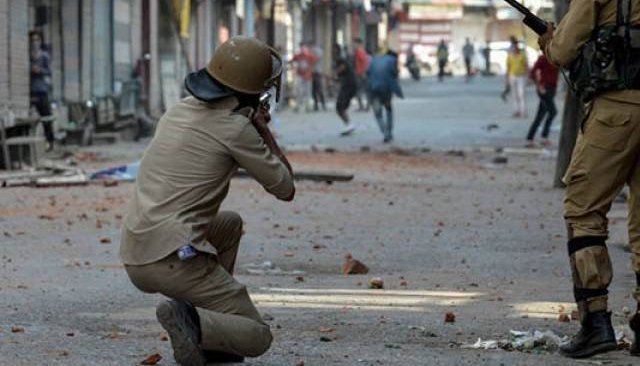 Crowds of innocent people stared to que outside petrol pumps, ATMs and food stores. A wave of terror and chaos crashed on the Kashmiris, following the night of Saturday. Thousands of tourists, students and pilgrims were evacuated since Friday.

The residents were told to not panic, even though curfews were imposed on hospitals and educational institutes. Mobile signals and internet connection were timed out for the citizens. It sure sounds like a war zone in a remote area, but this is the current situation in India Occupied Kashmir after India decided to declare a “terror threat” in the region.

Yet again India proved to be the reason of rising unrest in the region. It seems like creating a sense of panic and distress for the Kashmiris is a repeated pattern of India. Rather than providing a sense of relief and security, Modi’s government is focused on creating hurdles for the citizens and is doing everything in their control to disrupt the lives of thousands of people.

Killing even a single innocent soul is an attack on the entire humanity. It is high time that the Indian government realizes, destroying millions of homes daily will never be forgotten and it will never be justified. But knowing the leadership behind, it is far too much to even assume that they care a bit about anyone’s life but are focused on showing their unnecessary power.

India has gone far enough to use Cluster ammunition along the Line of Control (LoC), which violates international law. The initial attack killed two civilians, including a 4-year-old boy and critically injured many. Dropped from the air or fired from the ground, cluster bombs explode in mid-air, scattering bomblets, and affecting many individuals. Custer bombing is against international law because it causes long-lasting socio-economic problems. This is not the first time that India is violating this law and attacking the LoC, with this cheap ammunition. And it is surely not the first time that India is getting away with this. It’s a shock that the UN has still not condemned India for this act. It’s about time that the UN takes notice of this and holds India accountable, or else this bloodshed will turn into a bloodbath very soon.

The Modi government is nothing but guilty of destroying beautiful happy families and turning them into mourning cemeteries. Thanks to India, human rights abuse is a common concept in India Occupied Kashmir, and from the trend that is followed by them, it seems to remain so. The lack of democracy and humanity in India occupied Kashmir has been observed for a long time now.

Prime Minister Narendra Modi’s plan to overthrow all democratic conventions to fulfill his ideological parent agenda and appease to his populist voter base is certainly a recipe for disaster. The Kashmiri youth has had enough and is ready to sacrifice their lives if it means freedom from the existing barbaric system.

Nearly 80,000 paramilitary forces have been flown into Kashmir in the past 10 days, to add to the suffering of the people of Occupied Kashmir. They are not only deprived of their right to self-determination but are also deprived of basic human rights.

Kashmir has suffered enough through the hands of India. India has left no stone unturned to destroy one of the most scenic nations of the world. Ban on public gathering, pro-freedom leaders detained, army takeover in schools and colleges and communication clampdown is increasing fear, anxiety and, uncertainty in the region. This tyrant regime should be sanctioned before it’s too late.

The writer is the Chancellor of Ziauddin University, Karachi