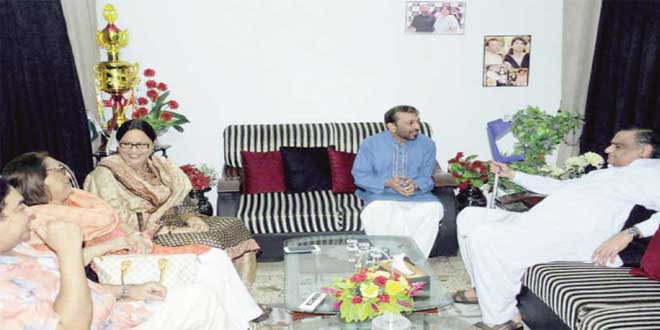 KARACHI: Amid increasing political temperature in the metro polis and PPP intruding into pockets considered fortress of Muttahida Qaumi Movement (MQM) now MQM-Pakistan, PPP Karachi Division President Dr Hussain yesterday called on MQM-P chief Dr Farooq Sattar at his ancestral residence and discussed issues of mutual interest. Informed sources told National Courier that PPPP leader invited Dr Sattar to join PPPP. He also expressed regrets over a recent statement of Dr Farooq Sattar demanding a new province. Dr. Asim said that PPP is for one Sindh and one Pakistan, adding that PPP would not tolerate even talk of division of Sindh. Both the leaders formally discussed the issues concerning the people and the country. Dr Farooq Sattar highlighted the civic problems being faced by the people of Karachi. Dr Farooq Sattar also referred to the process of purported accountability and references against political figures including Dr Asim Hussain. The process of accountability should be transparent and every one must be treated equally while subjecting to “ accountability:, Dr Farooq Sattar said. Sources said that Dr Asim’s visit was purely a personal and discussions which were held between him and Dr Sattar were of mutual interest. However, when such meeting are held, the media blows the news out of proportion, sources concluded.