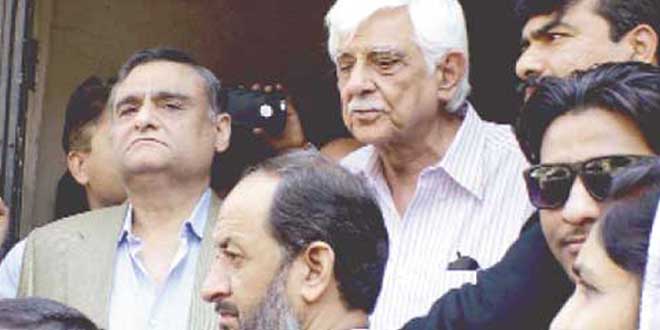 KARACHI: The Accountability CourtIV deferred the hearing of NAB reference No.19/2016 (JJVL case) against former petroleum minister Dr Asim Hussain and others for Monday 20th February. During the proceedings yesterday, defence counsel Anwar Mansoor Khan pointed out a number of contradictions in the reference filed by NAB authorities indicating that his client Dr Asim Hussain was not involved in any sort of corruption as alleged by the prosecut The tendering process of gas field concerning reference started in year 2000 when Asim Hussain was not minister. Decision of extraction was not done by him nor was it taken in his tenure as Petroleum minister. As per Supreme Court record JJVL was not the only bidder in the tender but five other parties also bought the tender documents and participated. The other parties went to court and after court’s decision never came back to participate in the tender. Investigation Report says that on 29th November 2015 Dr Asim Hussain was not under arrest while the fact is that he was in custody since 26th August 2015, therefore, it was an incorrect statement by Prosecution defense counsel argued. It was nowhere mentioned that how he caused the loss of billions of rupees. There is not a single document or statement taken from Dr Asim Hussain, the defence counsel added. He further stated that in year 2008-9 Dr Asim was not minister when the KPG gas field was discovered but re-bidding of KPG was done in his tenure and it was a fully transparent process under the rules and regulations. Anwar Mansoor Khan further stated that Dr Anwar Sehto was the complainant in reference No.19/2016 but the prosecution has kept him out of picture. Anwar Ali Sehto, the complainant in his statement under section 161 Cr.P.C failed to implicate or connect Dr Asim with alleged corruption. His tenure as minister was the year 2012-13 only and this fact is concealed from the court, defense counsel argued. Anwar Mansoor Khan will resume his arguments on Monday, Feb 20.