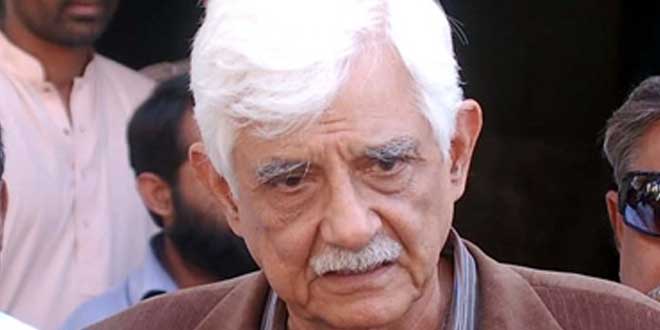 KARACHI: Parliamentary leader of the PPP in the Upper House Senator Taj Haider has said that PPP Karachi Division President Dr Asim Hussain is being held hostage for initiating work on a dormant Kunnar Pasakhi Gas field in Sindh to add 10pc to the total national gas production. PPP leader said that people like Dr Asim were being punished for serving the nation while those who are plundering the national exchequer are not being even touched. “This was clearly One Nation-Two Laws. If those who serve the country continue to be punished, the few experts who are still working in Pakistan will also be compelled to go abroad,” he warned. Talking to media persons after hearing of Dr Asim case in NAB court, Senator Taj Haider said that it was astonishing that Dr Asim Hussain was being punished for enhancing the gas potential. It was Dr Asim Hussain who took the initiative to start production at Kunnar Pasakhi gas field as early as possible to reduce dependence on imports and to reduce gas shortage. “A fully operational Kunnar Pasakhi gas field could have forestalled closure of hundreds of textile mills and prevented nosedive of our exports,” he added. He further said that LNG is being imported without floating any tenders and prices are unknown to whole of Pakistan, which shows that country was being hit with another biggest financial scam but NAB and other institutions targeting Dr Asim were silent for unknown reasons.

296 thoughts on “Dr Asim being punished for serving the nation: Taj Haider”