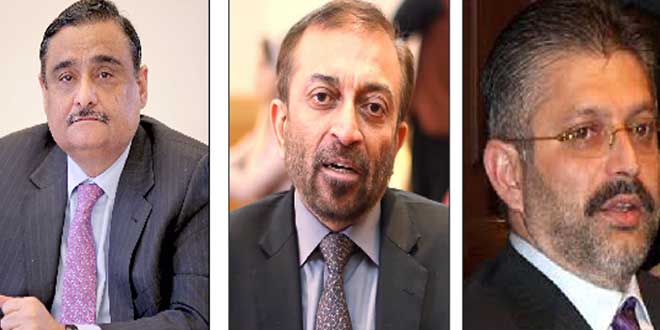 KARACHI: The corridors and court rooms of Sindh High Court, Accountability, Anti-Terrorism Courts would be brimming with full of activities as three high profile politicians would appear or produced before the judicial officers today. According to National Courier’s court reporter, a Referee Judge of High Court of Sindh is likely to announce his verdict in bail pleas by former Petroleum Minister Dr Asim Hussain after a split decision handed down by a division bench of SHC recently. Dr Asim’s lawyers are seeking bail on medical ground as the PPP senior leader is suffering from lumbar problem, heart ailment and recently impairing vision as he is held in custody since August 2015. In another happening, Dr Farooq Sattar is likely to surrender himself before an Anti -Terrorism Court (ATC ) in a hate speech I n which the court has again ordered his arrest and production before it today. It may be mentioned here that Dr Sattar was taken into custody for an hour and a half on night between Friday-Saturday but was reportedly released on intervention by a federal minister close to PM Nawaz Sharif. Dr Farooq Sattar has reportedly chosen to voluntarily join the trial in which he is now being treated as an “ absconder” along with a number of other MQM-P leaders, most of whom have secured pre and post arrest bails. Dr Farooq Sattar was booked after hate speech by MQM founder on August 22, 2016. The enraged party activist allegedly instigated by the speech attacked a media house and resorted to arson. Dr Sattar was accused of facilitating the provocative speech. In yet another development today, Former Sindh Information Minister Sharjeel Inam Memon, would also appear before an Accountability Court at Karachi as he is wanted in an alleged case of corruption worth 500 million. He was accused of issuing advertisement to newspapers which never went into print and routinely referred as ‘ dummy newspapers’. Sharjeel who landed in Islamabad in wee hours Sunday was also taken into custody by NAB officials. He was released few hours later after his lawyers produced interim protective bail granted to him by Islamabad High Court which expires today requiring him to surrender before the trial court at Karachi. All eyes are thus set on courts and await with a hope that justice is not only done but seems to be done.

237 thoughts on “All eyes set on courts”