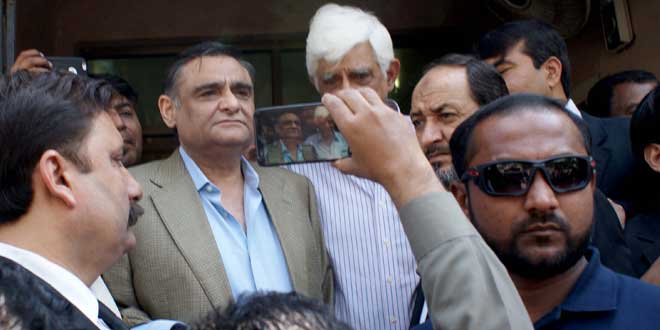 KARACHI: The referee judge of Sindh High Court Aftab Ahmed Gorar has adjourned the hearing of Dr Asim Hussain’s bail applications till 20 March. During the hearing yesterday, Barrister Latif Khosa appeared on behalf of Dr Asim. Khosa explained before the court that due to longer period of confinement Dr Asim has become a psychiatric patient. He said, “We want Dr Asim’s bail due to his worsening medical condition. Since last six months Dr Asim has caught new diseases. There is almost no medical facility in Jinnah hospital. Medical board has suggested surgery, which is not possible in Jinnah hospital.” He further stated that because of constant stress and fear, Dr Asim has become a heart patient. “His wife is a cancer patient while Dr Asim’s mother and his daughter in law are also seriously ill. He is not even getting basic medical facilities.” Justice Gorar was appointed on 16th February as the referee judge to decide on the two bail applications of former petroleum minister Dr Asim Hussain. SHC Chief Justice Sajjad Ali Shah had appointed Justice Gorar to examine the split judgment and decide the matter. A two-judge bench, comprising Justice Muhammad Farooq Shah and Muhammad Karim Khan Agha, had, on Feb 3, given a split judgment in the matter. The judgment was announced with Justice Farooq Shah, who headed the bench dismissing the pleas, while Justice Karim Khan Agha granting the bail. In a 32 page judgement, Justice Karim Khan Agha in his dissenting note on granting bail said Asim’s life could be at risk, therefore, he should be given bail on two surety bonds of Rs 2.5 million each. The application was filed U/S 426, Cr.P.C. The applicant’s counsel pointed out that CP-7597/2015 was filed for bail against the NAB reference No. 13/2016, and CP-1696/2016 was filed against NAB reference No. 19/2016, both pending with the Accountability Court since long.