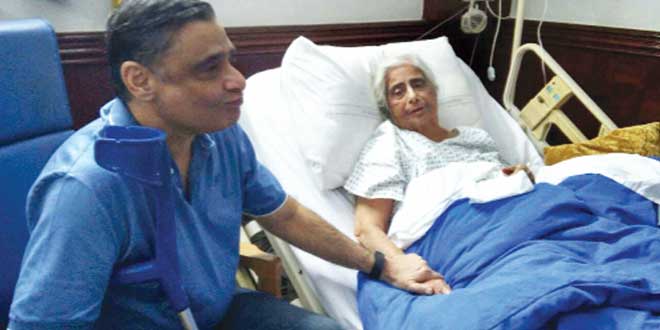 KARACHI: Former petroleum minister Dr Asim Hussain yesterday visited Ziauddin Hospital in North Nazimabad to inquire about the health of his ailing mother. Dr Aijaz Fatima has been suffering from a long spell of illness and was admitted to the hospital on Sunday. Dr. Aijaz Fatima, aged about 90 years, was brought in a critical condition on Sunday morning (November 20). Doctors said that she was affected by Ischemic changes and Addisonian crisis. According to Dr Asim’s spokesman Amir Shehzad, Dr Asim was allowed to visit his ailing mother on special permission by Sindh government. Speaking to media members at the Ziauddin Hospital, Dr Asim said that he had total confidence in the courts and was sure that he would be granted justice. Dr Asim himself suffered recently from a paralytic attack and has been allowed by the NAB court to visit Ziauddin Hospital for hydrotherapy.