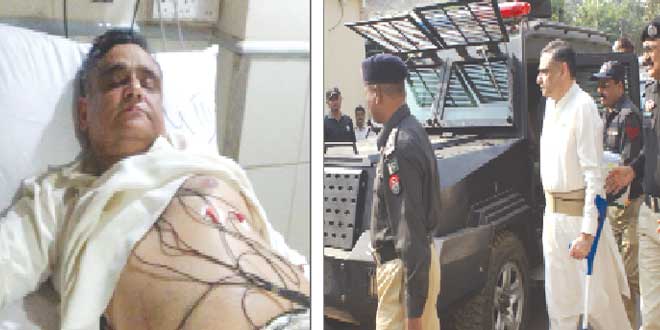 KARACHI: The unwarranted heavy deployment of members of a law enforcing agency outside the premises of an Accountability Court here yesterday trying Dr Asim Hussain caused his health to deteriorate suddenly. According to Dr Asim’s spokesman, he suffered from “Rangers Phobia“ and insomnia . Upon return from the NAB court he complained of pain in chest and was sweating profusely which increased his heart beat after which he was immediately taken to the National Institute of Cardio Vascular Diseases (NICVD) and was treated at the Coronary Care Unit (CCU) of the facility. Hours later he was shifted to a suite and was still under observation the NICVD. The JPMC heart specialist advised him complete rest with no visitors allowed said Dr Asim’s spokesman requesting prayers for his early recovery. Earlier, the Accountability Court in the land allotment reference against former petroleum minister Dr Asim Hussain recorded the statement of a Prosecution Witness (PW) Mohammad Naveed, Manager of M/s Wall Street Money Changers. The witness stated that his company had done about 19 transactions with Dr Asim and all the transactions were in accordance with law and under the rules and regulations as prescribed by State Bank of Pakistan. The court asked to produce the record of those transactions on 20th December and the hearing was adjourned. The court adjourned the hearing of JJVL reference for 24th December. Informed sources disclosed that with reference to the security of Dr Asim, the NAB court judge called a meeting of the lawyers of Dr Asim and the Special Prosecutors of NAB in his chamber soon after the court hearing.