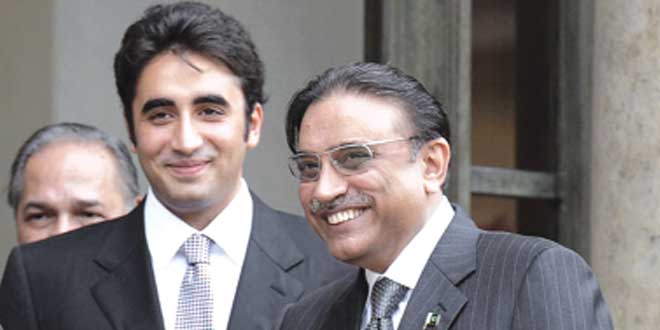 DR ASIM IS A POLITICAL PRISONER OF CHAUDHRY NISAR: BILAWAL

KARACHI: PPP chief Asif Zardari would reach Karachi airport on December 23, this was announced by Bilawal Bhutto Zardari in a news conference yesterday. Doctors have allowed Asif Zardari to travel, so he is coming back and will be with us on Dec 23, Bilawal said. Unless PML-N accepts our four demands, which include bill on Panama Papers, there will be no democratic accountability in the country, he added. The PPP chairman said since Asif Zardari is coming back, we hope to get our demands met under his able leadership. Referring to cases against Dr Asim, Bilawal blamed PML-N for victimizing PPP. Our Karachi president is political prisoner of Chaudhry Nisar, he said. Bilawal was optimistic his party would put up “a strong opposition” against Prime Minister Nawaz Sharif’s ruling PML-N, and said: “We need the great strategic skill of Zardari to overwhelm the Sharif government so that despite their two thirds majority, they will have to implement my four demands.” The PPP has threatened to launch an ‘anti-government drive’ on Dec 27 if its four demands are not met. The demands include: formation of a parliamentary committee on national security, adoption of a PPP-drafted bill on Panama Leaks probe, implementation of the decision of a multi-party conference chaired by Asif Zardari on CPEC and appointment of a full-time foreign minister. Later, a meeting was held at the CM House, chaired by Chief Minister Sindh Murad Ali Shah in which it was decided that PPP Chairman Asif Ali Zardari will be accorded a rousing welcome on his return. The party will chalk out the welcome plan in a couple of days.