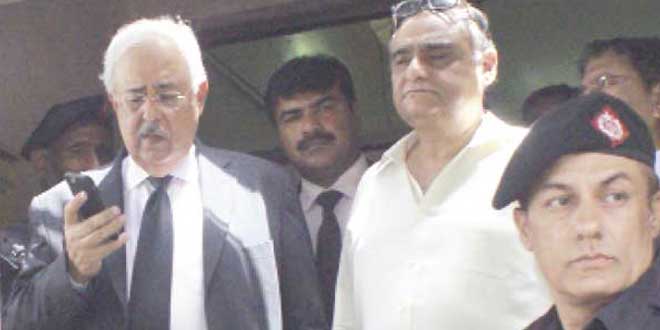 KARACHI: The defence counsel for Dr Asim Hussain, Anwer Mansoor Khan in his arguments in Accountability Court No. IV yesterday contended that there is no written complaint filed against former petroleum minister Dr Asim Hussain by the complainant Dr Anwer Ali Sehto in NAB reference No.19/2016 of JJVL. The complainant was sacked by SSGC on corruption charges, he said. He will continue the arguments during next date of hearing that is fixed on 27-05-2017. Dr Asim and others appeared before Accountability Court. Earlier, the Accountability Court in NAB Reference No.13/2016 fixed June 6 as next date of hearing. Anwer Mansoor stated before the court that Asim Hussain held the charge of petroleum minister from April 2011 to March 2013 only. He was handed over to police from Rangers custody after 90 days and NAB made this case without any proof and witnesses. The JJVL project was started in year 2010 when Dr Asim was not the petroleum minister. He further stated that under the law a charge could not be framed unless there is any substance against an accused. There were five gas fields in Sindh province. When bids were offered for this project there were 19 companies who purchased the tender documents in October 2010. Out of those only five bidders participated in this tender opening. There was a board who proceeded in accordance with law to complete all the formalities, hence there was no question of any offence, he added. Meanwhile, Dr Asim Hussain, who is also President Karachi PPP, replying to questions from media outside the court said that federal government did not take the case of Indian spy Kulbhushan Jadhav seriously in international court. “It looks like Nawaz Sharif government has a soft corner for India. The action has distorted the image of Pakistan,” Asim added.