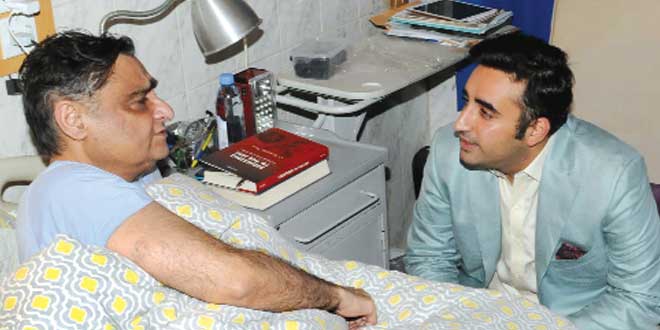 KARACHI Following the visit of Pakistan Peoples’ Party chairman Bilawal Bhutto Zardari on Saturday various other leaders of the party visited ex petroleum minister Dr Asim Hussain at the Jinnah Postgraduate Medical Centre. Dr Asim who suffered a paralysis attack on Friday is under treatment at the hospital. These leaders included Chaudhry Aitzaz Ahsan, Leader of the Opposition in the Senate of Pakistan, Syed Khurshid Ahmed Shah Leader of the Opposition in National Assembly, Faisal Karim Kundi former Deputy Speaker, National Assembly of Pakistan, Ch. Manzoor Ahmed, Member Central Executive Committee, Qamar Zaman Kaira former minister of information and mass-media broadcasting, and Senator Saleem H. Mandviwalla. They inquired about the health of Dr Asim Hussain and prayed for early recovery. Earlier, during his visit Bilawal Bhutto Zardari said Dr Asim is a worker of PPP and not a terrorist; he must be given proper medical treatment . Speaking to journalists after the meeting Bilawal Bhutto said, “I want to remind all of you that he is not a cleric from Lal Masjid, he is Dr Asim Hussain, who has given us the Ziauddin Hospital which is treating people of this city.” PPP chairman said that Dr Hussain is a “political prisoner” of the Nawaz Sharif’s government, adding that, the Prime Minister is “exploiting the NAP to weaken and intimidate his opposition.” “Dr Hussain has suffered a severe paralysis attack. The tests that are required to ensure no harm will come to this individual are not available in Pakistan,” the chairman added. Hospital officials said doctors took him for an emergency check-up where his MRI and CT scan tests were conducted. “Dr Asim Hussain is currently under observation,” doctors said. They added that the attack might be the result of high blood pressure and excessive stress. The doctors advised him complete rest.