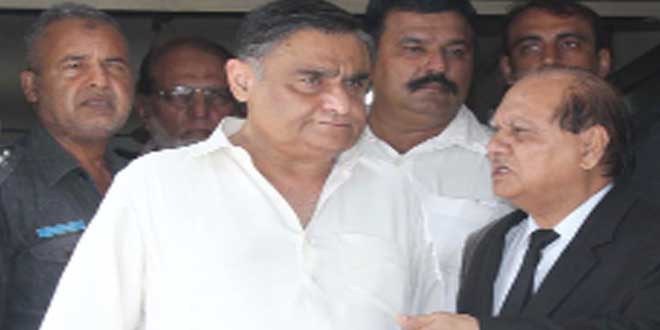 KARACHI : Former petroleum minister Dr Asim Hussain appeared before the Accountability Court No. IV hearing Jamshoro Joint Venture Limited (JJVL) reference No. 19/2016 here yesterday, while the court adjourned the proceedings till 29th July. During the hearing Azhar Siddique Chau-dhry, Defence Counsel for Basharat Mirza co-accused referred to section 265-D. He said this case was not registered on State’s complaint but based on source report only. The NAB investigation was authorized on 19 February and the report was submitted on 4th March, hardly within 10-days which is amazing, the counsel said. He further stated that the affairs of the Company were run by Board of Directors but none of the Board members were made accused in the reference. There were only three accused; Dr Asim , Basharat Mirza and late Zahid Bakhtiar. OGDCL failed in gas exploration even after the lapse of seven years, he informed the court adding that there was no merit in this reference. Dr Asim Hussain later talking to media persons said Nawaz Sharif had stated in India that Kargil was a misadventure. After this statement no doubt remains that he was an unpatriotic prime minister. He always disgraced the national institutions. We are not part of his adventures. To another question about raid at his sister’s home Dr Asim said NAB is attempting to pressurize and influencing his case.