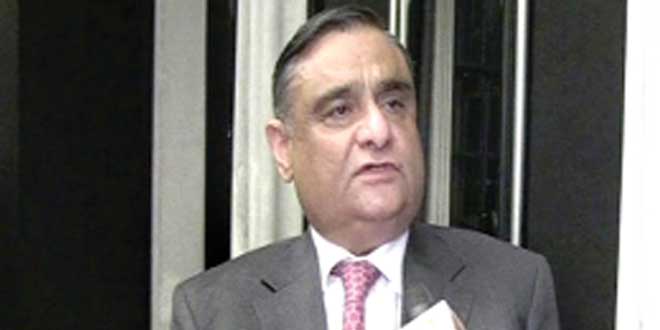 LONDON: Pakistan People’s Party (PPP) leader and Asif Ali Zardari’s close friend, Dr Asim Hussain, has said that former interior minister Chaudhry Nisar Ali Khan attacked Maryam Nawaz Sharif at a difficult time in order to damage Begum Kulsoom Nawaz’s election campaign in NA-120. Hussain, who came to London three weeks ago for his medical treatment after getting bail from the Supreme Court, said Nisar has proven through his actions that he’s not a friend of Nawaz Sharif and that he is motivated by his own selfish interests. Talking to Geo News exclusively the former petroleum minister advised Chaudhary Nisar to learn lessons from him how to stand with friends in difficult times and show character instead of stabbing them in the back. “If he (Nisar) was sincere to the father and family, he shouldn’t have done what he did in NA-120 campaign. I spent two years in jail for my friend (Asif Ali Zardari) but didn’t go against him. If ever I disagree with the family or develop difference of opinion, I will step aside and will go quiet but I will not launder my differences in public, I will not attack them. I have morals, I am a man of morality. He (Nisar) has no moralities. He has done nothing for Pakistan except making long speeches and tall claims.” The PPP leader told in an interview that Maryam Nawaz harnessed a good campaign in NA-120 but was attacked by Nisar because “uncle Nisar doesn’t like her, doesn’t see his future in the party. Maryam ran a good campaign, it was her own constituency which has traditionally sided with Nawaz Sharif. There have been complaints that NA-120 has been neglected but the voters still supported Kulsoom Nawaz, and despite attacks by Chaudhary Nisar. He knows his politics is over. He knows it’s time for uncles to step aside and move on when the next generation takes over. He has no stakes in Pakistan, his family lives in America and eventually he will shift there,” said Dr Asim Hussain, adding that Nawaz Sharif should realise that Nisar is not sincere to him and not his friend. Advising Nawaz Sharif to be careful of the former interior minister, Dr. Hussain said the Ministry of Interior is “already performing better under Ahsan Iqbal and this was reflected when the ministry did the correct interpretation of the decision of Pakistan’s Supreme Court in my case.”