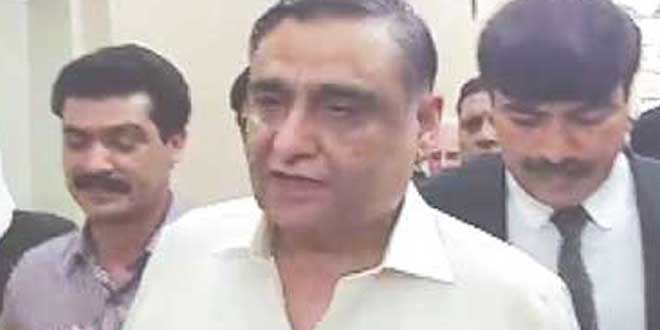 By Nasir Mahmood
KARACHI : The anti-terrorism court has allowed Dr Asim Hussain  to leave abroad for two weeks to get medical treatment. The court permitted the former minister to leave the country following the submission of Rs 2 million as surety and ordered him to return to the country within two weeks. On November 1 last year, the Sindh High Court had granted bail to Dr Asim Hussain in a terrorism case.
The ATC heard yesterday an application filed by Dr Asim seeking to remove his name from Exit Control List (ECL) so that he could proceed abroad for treatment.
Dr Asim Hussain appeared before the acting judge of Accountability Court where the next date of hearing was fixed as 29th April.
Dr Asim Hussain on his return from Accountability Court replying the questions from media members whether his party was preparing to participate in next general elections refused to comment and stated that he is not feeling well and not involved in politics for the time being.
Replying to further questions from media Dr Asim said; “I want to leave politics but you are dragging me again into politics.”
To another question he concluded by referring to an English pro verb “empty vessel makes more noise.”