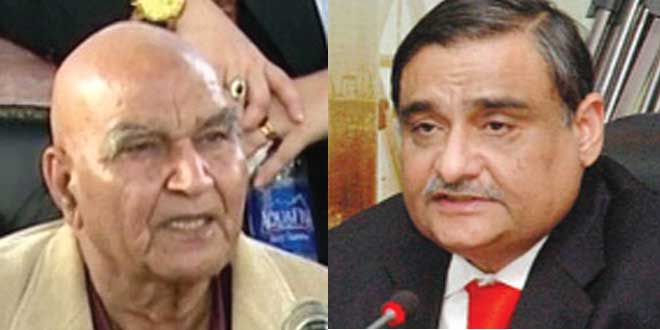 VIOLATIONS COMMITTED BY POLICE, RANGERS IN DR ASIM, PROF ZAFAR AND OTHER CASES

KARACHI: The Amnesty International has urged the citizens of Pakistan to file appeals before President of Pakistan Mamnoon Hussain, Prime Minister Nawaz Sharif and Sindh Chief Minister Murad Ali Shah against the human rights violations committed by Police and other law enforcement agencies, including Rangers, against MQM leader DrZafar Arif and PPP Karachi President Dr. Asim HUssain during their detention. In a call posted on the website of the Amnesty International , the organisation has requested to file these appeals before February 3, 2017. 70-year-old Dr Zafar Arif, a retired professor, was arrested on 22 October, 2016, and remains without access to a lawyer or medical care. He is a heart patient and there are grave concerns for his health. Dr Zafar was charged under the Maintenance of Public Order Ordinance for inciting public disorder and detained at Karachi Central Prison and according to Dr Zafar Arif’s family members, Amjadullah Khan continues to be detained and is routinely beaten. Dr Zafar Arif remains detained in Karachi Central Prison without access to medical care or legal representation. On 17 November, Dr Zafar Arif’s detention was extended for a further 30 days by the Government of Sindh Home Department. According to the Deputy Inspector General of Police South Zone Karachi’s report, his detention was extended because it was felt that his release would increase tensions between MQM London and MQM Pakistan, and would cause “disruption of public peace”. On 20 December, the Home Ministry ordered Dr Zafar Arif’s and Amjadullah Khan’s release. However, according to Dr Zafar Arif’s family, the media and other witnesses gathered outside the prison, both were rearrested minutes after their release by the Azizabad police and taken to the police station where he was held in custody overnight. Media sources claim they were both charged due to inflammatory speech. Moreover, Dr Asim Hussain, a senior member of the Pakistan People’s Party (PPP) and a former federal minister, was arrested by the Rangers on 26 August 2015 on charges of “being involved in offences relating to misappropriation of funds for enhancing and supporting terrorism activities” under the Anti-Terrorism Act 1997 and two other cases by the National Accountability Bureau for corruption. He was subsequently held by the Rangers under administrative detention at Sub Jail Mitha Ram Hostel Karachi between August and November 2015. Dr Asim Hussain claims that during this time, he was subjected to cruel and inhuman treatment by being made to stand in a dark room all night with his hands tied behind his back. He was also denied access to a lawyer and claims not to have received adequate medical treatment. Since November 2015, Dr Asim has been transferred into the custody of the National Accountability Bureau (NAB) and the Sindh Police and is held in Jinnah Hospital. His health has deteriorated considerably during this time.

Updates
« Why not him? Asif Zardari visits Dr Asim in NICVD »