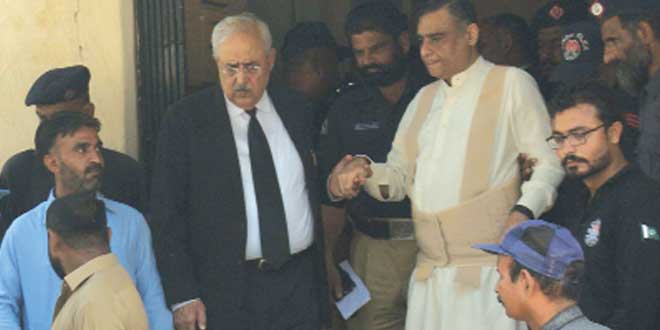 KARACHI: The Accountability Court IV on Saturday’s hearing directed the NAB prosecutor to submit his report on October 18 about the hospitals and SPAs mentioned in the list submitted by National Accountability Bureau’s (NAB) IO for Dr Asim’s treatment during previous hearing of 7th October as to whether they had the facility of hydrotherapy or not? The court also recorded the statement of Amaduddin Chachar, Section Officer, Sindh Revenue Board, and adjourned the case till October 29. Amaduddin was cross examined by defence counsel Amir Raza Naqvi. Replying to various queries, he said that his department usually issues allotment letters of land, but the court while examining the record observed that the copy submitted by him was not of the allotment letter for the land allotted to Ziauddin University. To a question about lease agreement, he said it is formalised between the deputy commissioner on behalf of government of Sindh and the allottee, and the lease period starts from the date of signing of an agreement. To a question raised by defence counsel whether in all these cases any lease agreement is issued or not? He replied that lease agreement and provision of the land allotted is responsibility of the land utilization department. This is not our concern. The witness said that any notice is not issued to Dr Asim for non-utilization of land allotted to Ziauddin University. He also said that he did not inform the NAB IO that this matter was already in Supreme Court, hence sub-judice. With reference to the JJVL (Jamshoro Joint Venture Limited) case, the defence counsel for another accused Basharat Mirza, Mohammad Azhar Siddique Advocate challenged the authorization of inquiry by NAB officials while judgement of the Islamabad High Court was already there, he said. After the implementation of Article 10-A the whole scenario has changed, he added. He said that inquiry of the case was initiated on 22nd February 2016 while the statements under section 161 were recorded much before this date. Azhar Siddique argued that under the law this is not a Reference and hence not maintainable. Right of fair trial is not provided to the accused and Section 265-C is violated by not supplying all the copies of record and statements to the accused. He further disclosed that no member of the boards of directors of OGDCL and SSGCL are made accused in this case. All of them had appeared before the Islamabad High Court and submitted that no crimes had occurred in this case. The defence counsel alleged that on the part of NAB officials this is not the inefficiency but a criminal negligence. The court adjourned the hearing of the case for 29th October.

14,888 thoughts on “Witness admits no illegality, does not possess allotment order in Dr Asim’s cases”