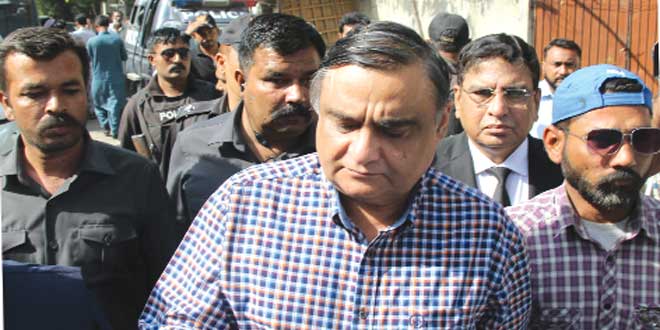 KARACHI: The Accountability Court-IV will continue to hear NAB reference No.13/2016 against former petroleum minister and President PPP Karachi Division, Dr Asim Hussain today. Yesterday, Amir Raza Naqvi, defence counsel for Dr Asim Hussain started cross examination of Prosecution Witness (PW) Mohammad Akram, the UBL branch manager. During hearing of the case defence lawyer referring to the documents submitted by PW asked him whether he was busy in preparing the said record with NAB’s connivance during past six months soon after recording his statement in the court on 21-2-2017. The witness replied in affirmative. He confirmed that he did not submit such documents before the court on 21-2-2017 at the time of recording his statement. Mohammad Akram replying to another question of defence lawyer stated that he was called by NAB investigation officer Zameer Abbasi on telephone to appear in his office. He claimed that he was also issued a letter to appear before the NAB authorities but he did not mention about it in his statement recorded under section 161 neither he had produced this letter on court record. On a query whether he could produce the said letter now or have its photo copy to submit in the court, the witness said he was not in this position. Defence lawyer on this occasion, requested the court to direct the PW for production of that letter. Mohammad Akram said the letter was not in his possession, he would try to obtain a copy from the bank’s head office if it is available there. The court ordered to produce the letter next day (today) while adjourning further proceedings till 9.00 am.