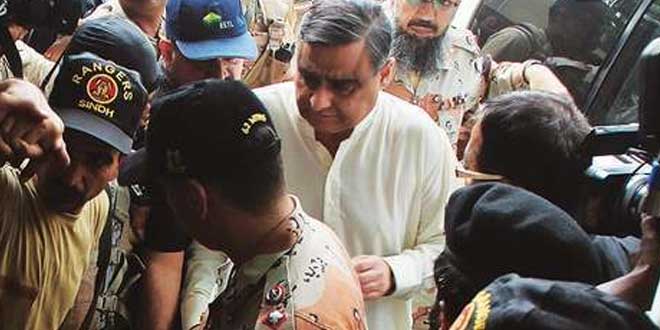 HEARING IN REFERENCE AGAINST DR ASIM PUT OFF TILL JAN 6

KARACHI: The Accountability Court IV in the land allotment reference No.13/2016 against former petroleum minister Dr Asim Hussain court recorded the statement of a Prosecution Witness (PW) Mohammad Naveed, Manager of M/s Wall Street Money Changers. The witness in previous hearing had stated that his company had done about 19 transactions with Dr Asim and all the transactions were in accordance with law and under the rules and regulations as prescribed by State Bank of Pakistan. On Saturday’s hearing the witness submitted the record of those transactions. Defence lawyers on this occasion raised a query whether this record was computer generated or the system generated. If it was computer generated then it may not be acceptable by the court, they said. Court adjourned the hearing for 6th January 2017. Other accused who are facing charges are former petroleum secretary Muhammad Ejaz Chaudhry, administrator of Ziauddin Medical Centre, Dubai Abdul Hameed, former directors of the Karachi Development Authority Syed Athar Hussain and Masood Haider and Karachi Dock Labour Board’s former chief executive officer Safdar Hussain. Earlier, the court was informed that Dr Asim could not be produced before it due to his ill health condition. He was admitted to National Institute of Cardiovascular Diseases on the night of Dec 19 due to having heart trouble. The court was further told that the ECG and other medical tests of Dr Asim were conducted. He was under the surveillance round the clock. The court also adjourned the hearing of JJVL reference No. 19/2016 of Rs17 billion to 7th January 2017. According to NAB prosecutor, the accused allowed JJVL (Jamshoro Joint Venture Limited) to process gas at different gas fields without conducting an open auction, signing agreements and memorandums of understanding as required by law. Other accused included SSGC managing director Khalid Rehman and former officials Zuhair Siddiqui, Azeem Iqbal, Shoaib Warsi, Yusuf Jamil Ansari and Malik Usman, OGDCL former managing director Basharat Mirza and official, Zahid Bakhtiar and JJVL chief executive officer, Iqbal Z Ahmed.