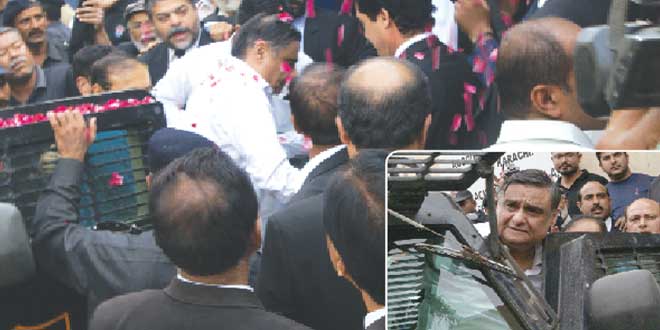 WILL FACE ALL HIGH-HANDEDNESS WITH COURAGE: DR ASIM HUSSAIN

KARACHI : The hearing in NAB reference No.13/2016 against former petroleum minister Dr Asim Hussain and others was adjourned till Feb 21 by Accountability Court IV here yesterday. Defence counsel Amir Raza Naqvi talking to media after the hearing was put of stated that since prosecution did not provide the original record as directed on previous date by the court and the prosecution counsel was not present , the court adjourned the hearing. Dr Asim Hussain later talking to media outside the court said that he is not feeling well. His wife, daughter in law and mother are hospitalized while he himself is also in hospital. “We will face all the high-handedness with courage”, he said. Replying to another question about the country-wide strike against drug policy of government he said this is absolutely a wrong policy. According to my observations they should de-control the drugs. About 350 essential drugs should be controlled as already done by India and Bangladesh and other countries while the remaining drugs should be decontrolled. There are 40 thousand drug registration applications pending with the government and due to some laws registration process is cumbersome for new drugs. Another point of concern is the low profit margin of 12-13 percent just like petroleum prices when it is reduced the theft cases are increased, Dr Asim Hussain concluded.