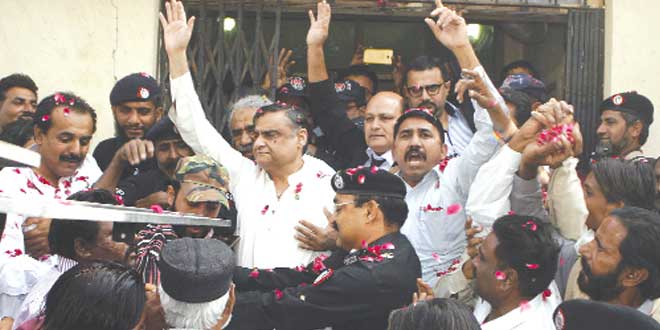 KARACHI: The Accountability Court No. IV in the land allotment reference No. 13/2016 against former petroleum minister Dr Asim Hussain recorded the objections raised by defence lawyer during cross examination of prosecution witness Zaigham Abbas, the NAB office clerk. The next date of hearing was fixed for 19th December. The witness stated that in his office all the mail is received by receptionist and then delivered to the concerned staff members. In this regard there is no written order issued to him, although his duty is not to receive the daily mail but on special directives by the director general he is performing this duty since the time of his posting in this office. To another question, he said that he cannot produce any written order or instructions in this regard. He agreed that in all the govt. departments there is a regular system of keeping record of inward and outward mails but in NAB office they do not maintain it. Therefore, he is unable to produce any such record from his office. Replying to various questions raised by Advocate Amir Raza Naqvi, the PW witness stated that his statement was twice recorded by the NAB IO Zameer Ahmed Abbasi. To a question about receiving of the land map from Survey Department, he said that as a receptionist he had received an envelope, opened it and handed over to the Investigation Officer. To another question from defence lawyer, the witness replied that the mail was delivered by Survey Department but he did not remember name of the person who had brought it to NAB office. He said that the NAB office reception CCTV recording cameras remain working twenty-four hours without fail.

253 thoughts on “‘NAB does not maintain mail record’”