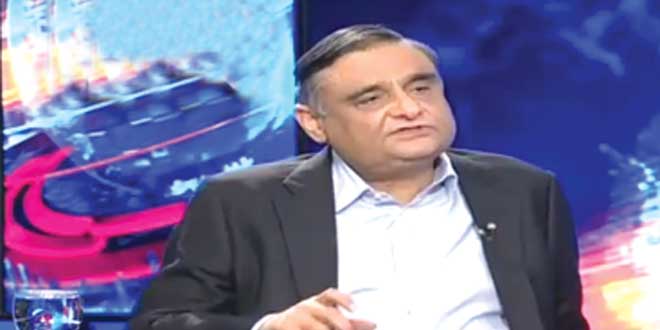 KARACHI: “The corruption charges of 462 billion rupees against me must be inquired from Nawaz Sharif and his govt or the former chairman NAB that where this amount has gone? If you see my JIT report it has alleged Rs 88 billion charges and 26 worldwide banks were claimed as my property. It was all part of the media campaign against me; for example the Rangers alleged Rs 2 billion corruption per day in PSO while the total income of PSO was not 2 billion a day.” Dr Asim Hussain, former petroleum minister and President of the Pakistan Peoples’ Party Karachi Division said this yesterday in his exclusive interview to a private TV channel. He said; “I am convinced that former NAB chairman took money from Nawaz Sharif and company to level frivolous allegations against me. He raided my sister’s house against which I have registered an FIR. He was a ruthless man. They held me in NAB detention but even for a single day there was no investigation held. But NAB stated in court that during investigation he revealed this and that. NAB fed wrong information to the Rangers.” Replying to another question, Dr Asim said; Chaudhry Nisar was issuing instructions to the Rangers and they kept me arrested for 19 months, under his ministry. He made me soft target just to squeeze Mr Zardari. They wanted to record my statement against Asif Ali Zardari just to trap him. They put the papers before me and ordered to sign on it. I have already challenged the statement attributed to me in the JIT video released to electronic media. The investigation officer in my case has confessed that he was under pressure. When as minister I delivered a speech that in year 2022 country’s gas reservoirs would be finished he made fun of me. He is a psychopath and has some problems. Nawaz Sharif is also an autocratic ruler and dictator who ruled through persons like Qamaruz Zaman and Saifur Rehman. He does not tolerate opposition, you can see their style of governance in Punjab which is not fair.” Dr Asim, responding to a question, stated that there was no deal with him or with Mr. Zardari over my release. I was released by Sindh High court where my bail was accepted. But this is a fact that PML-N government made the life miserable for the people. Anwer Majeed is a big businessman who has sugar mills and other businesses; this is unfair to say that he is involved in wrongdoings. He said, NAB is itself a corrupt organization; they don’t conform even to the jail manual, they have their own cells and does not provide medical health to the detained persons. They are dealing in different way with Nawaz Sharif as compared to the treatment given to me. They are paying money to everybody in bureaucracy. NAB is also bribed by them. This govt. has started borrowing from China while we had stressed to deal under barter system with China as we are food growing economy and China imports $1.2 trillion of foodstuff. Over a certain terms we have to return this $42 billion investment of CPEC. I have come to know that they have pledged certain airports, railway stations and other properties for the loans. The economy is suffering too much. “In my tenure the LNG price deal was half of the present govt’s deal with Qatar. I don’t know whether it would be called a corruption. There are two different scales of justice in the country.” Talking about the recent political scenario, Dr Asim said; “Nawaz Sharif has vote bank but Shehbaz Sharif does not. Nawaz has decided to bring his daughter; uncle Chaudhry has faded out and uncle Shehbaz also have to go. Marium should be given a chance. We are older generation and after some years we have to leave space for coming generation.”

283 thoughts on “‘NAB investigation officer confessed to being under pressure’”