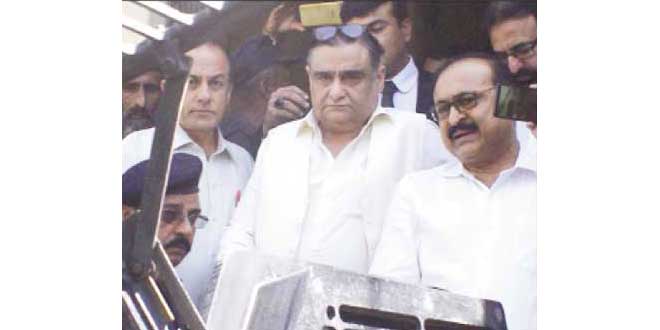 HEARING IN DR ASIM CASE PUT OFF TILL 9TH

KARACHI: The Accountability Court IV has directed the NAB to explain status of the land cases pending in Supreme Court. On the application filed by Director Land Ather Hussain, accused for allotment of land to Ziauddin Hospital, the court directed the prosecution to submit reply and bring original file of the land allotment with all note sheets etc. along with official documents on the next date. The Court in reference No.13/2016 against former petroleum minister Dr Asim Hussain and others has fixed next date of hearing as 9th March, while in reference No.19/2016 (JJVL case) the yesterday’s hearing was adjourned till March 18. The applications for amendments and charges by other accused would also be heard on next date. In reference No. 13/2016 the prosecution evidence UBL Manager Muhammad Akram Ansari’s 3500 extra documents were challenged by Dr Asim’s defence counsel Amir Raza Naqvi. He raised an objection that at this stage these additional documents may not be considered or accepted. This could be an attempt to open a new case against his client, Amir said. He said that so far there were eight evidences appeared before the court and defence had contested the case on those evidences submitted in the court. The prosecution counsel had not mentioned at any stage about these new documents’ presentation. “Hence, our case would be affected and at no condition it could be accepted” the defence counsel said. Amir Raza filed application against the extra documents to declare them unlawful and requested the court to summon the NAB chairman and he should be questioned why he had filed these frivolous and hidden documents at this stage of the case?