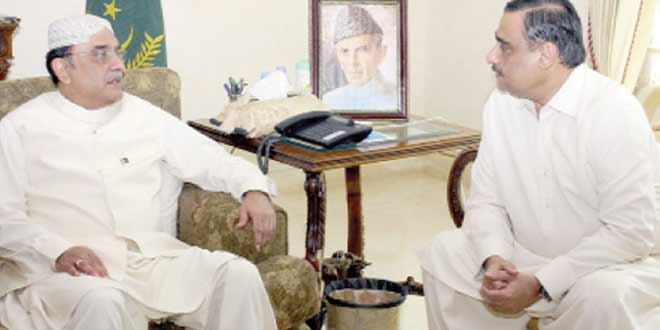 HE FACED BRUNT OF SITUATION AS HE WAS A ‘SOFT TARGET’

KARACHI: Former president and Pakistan People’s Party (PPP) Co-Chairman Asif Ali Zardari said his government had become stronger following an extension given to former army chief General (retd) Ashfaq Pervez Kayani. “Extension to former military chief General (retd) AshfaqKayani strengthened me as well as the Parliament,” he said during an interview on a private TV channel aired yesterday. When asked about DrAsim Hussain’s case, the former president was hopeful that Dr Asim will be released soon. He was of the view that DrAsim faced the brunt of the situation because he was a ‘soft target’. While commenting on the issue of giving extension to the current army chief, Zardari said: “It is prerogative of the current government to give the extension or not.” When asked about PPP’s strategy over Panama Papers case, Zardari was of the view that, “Parliament is the right platform and democracy’s evolution should happen in the parliament and not in the supreme court.” When asked to comment on PTI’s strategy regarding Panama Papers case, Zardari said: “Imran Khan took Panama Papers’ investigation to the supreme court but what will happen if the court’s commission fails to deliver the desirable results.” “I was away from politics of Pakistan because I wanted to give space to Bilawal Bhutto and other political leaders,” Zardari added.

6,384 thoughts on “Dr Asim should be released: Zardari”