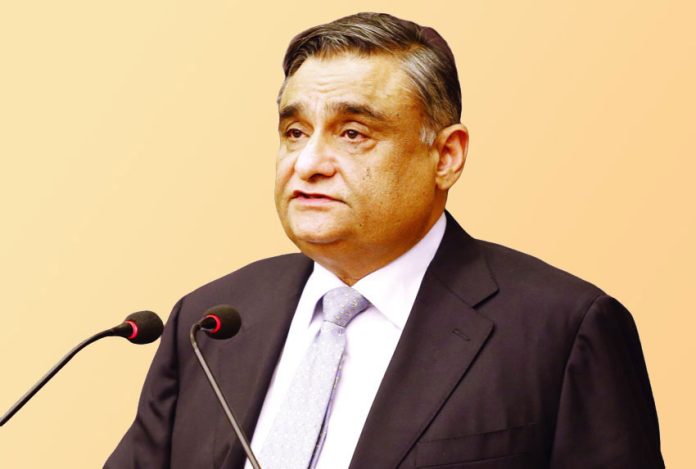 Karachi: Senior leader Pakistan Peoples’ Party and former Petroleum Minister Dr Asim Hussain while expressing sorrow over loss of precious lives and structural and agri-economy damage by unprecedented floods in country said, “We as a nation will overcome this situation with confidence, national spirit and concerted efforts in days to come”. Dr Asim while talking exclusively to Daily National Courier said “Our hearts go out to all the victims and their loved ones and to the millions of people who have lost property and their livelihoods,” he added.

He paid tribute to Government, the military and emergency services, the countless volunteers and aid agencies who are working in rescue and relief operations in flood-affected areas. He appealed all the political and religious parties to come forward and extend relief works by joining hands together for helping the nation in this crisis.  A huge relief operation is underway and international aid began trickling in as Pakistan struggled to deal with monsoon flooding that has affected more than 33 million people. He said that historic monsoons have washed away infrastructure, bridges, crops and roads while killing over 1,150 people. Country’s damage from floods could exceed $ 10 billion, he opined. He said Army, Navy and Air Force besides civil administration and non-governmental organisations response towards relief activities is praiseworthy. Dr Asim said, “Immediate priority should be to rebuild infrastructure once waters recede and to get agriculture sector back on its feet.”  He praised international response in this regard. He said China, Saudi Arab, Turkey, Iran, United Arab Emirates, United Nations, US, Britain, France and many countries pledge to help out Pakistan in hard times is encouraging.

Former Petroleum Minister also suggested coalition government to mobilise more resources for an effective recovery and in this direction government seems serious and confident and added that all provincial governments should start rehabilitation of educational and health facilities once floodwater is receded. Dr Asim expressing solidarity with flood affectees prayed for the departed souls and for the early recovery of the scores of injured and for the countless displaced persons to return back safely to their native places. PPP leader said that southern, southwestern and northern belt have been hardest-hit by floods. Large ribbons of farmlands and stored crops in these areas have been devastated. Pakistan has recorded worst floods since 2010, with rainfall crossing 390 mm this season ‘three times higher than national 30-year-average of 135 mm’. He said impact of calamity is expected to last 50 days, while rehabilitation process will take much longer. It estimates around Rs 1.2 trillion in losses to economy. It must be mentioned here that unprecedented wave of flash floods, historic monsoon rains, have washed away roads, crops, infrastructure and bridges in Pakistan, killing over 1,100 people since mid-June and affecting more than 33 million. Pakistan’s central bank had already flagged the heavy rainfall as a threat to the economic output, given its impact on the agriculture sector. As per an early and preliminary estimate by government officials, the damage from the floods could exceed $10 billion. Till now, the southern, southwestern and northern belt have been the hardest-hit by the floods. Large swaths of farmlands and stored crops in these areas have been devastated.It should be noted that prices of basic goods particularly onions, tomatoes and chickpeas are already soaring as vendors bemoan a lack of supplies from the flooded breadbasket provinces of Sindh and Punjab.