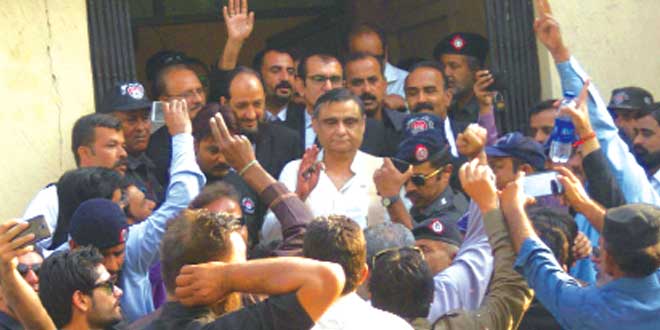 KARACHI: The National Accountability Court recorded the statement of a prosecution witness Younus Dahiri, the Survey Superintendent Karachi, about evidence of land encroachment by Ziauddin Hospitals of Dr Asim Hussain on Saturday. In the witness box, Dahiri admitted that they didn’t fulfill the legal requirements in the survey. After the recording of statement, the court ordered the prosecution to produce further witnesses. An application about surgery of Dr Asim Hussain was also taken for next date. In JJVL reference against former petroleum minister Dr Asim and others the defence lawyers stated that there were 38 witnesses in the case but NAB authorities did not provide the list of those witnesses. The NAB lawyer replied that they had not recorded the statement of those witnesses. However, the court ordered the NAB lawyer to submit his written statement before the court in this regard. The hearing of both the cases was adjourned for 8th December. Moreover, in ATC court No. 2 the case was adjourned for 7-01-2017 due to non-appearance of Dr. Asim Hussain because he was present in two cases in NAB court and therefore, Dr. Asim was not produced by the Jail Authorities in ATC Court.